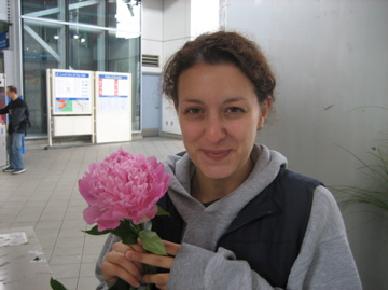 ONLY: How long have you been selling flowers here for?

R: I started about a year ago, at this stand. There was a “Help Wanted” sign in the stand downtown, and so I gave them a resume and they called me back that night. And it’s really a lot of fun actually.

ONLY: What is fun about it?

R: It’s just nice to be around beautiful things all day that smell really nice, and it’s nice being able to be creative.

ONLY: How do you get to use your creativity?

R: Well it’s really nice when people are, you know, they don’t really know what they want and they’re just kinda like “Just go for it!” It’s fun to be able to do that.

ONLY: What’s the most interesting experience you’ve had?

R: I dunno, I think I like having the freedom to make a really big bouquet. That doesn’t happen too too often, but if someone says “Okay, I have sixty dollars to spend, just put something together, anything you want”, it’s kinda like [makes an excited noise]. That’s really a lot of fun. It doesn’t happen too often. It happened last week, a guy that came, it was actually pretty late at night, 9:00 or something, and he said “Okay, make this,” and I said “Alright!”. That’s probably my favourite thing.

ONLY: What are you interests besides flowers?

R: I like to read. I really love animals, I grew up on a farm. I don’t actually have an animal right now, a dog or a cat, so I’m kind of sad. I like to visit the SPCA and cuddle with critters down there.

ONLY: You said you like to read, who is your favourite author?

R: I don’t know if I have a favourite, but I just finished reading James Frey’s My Friend Leonard, and that was really good.

ONLY: Oh, the same guy who wrote–

ONLY: Did you read that as well?

ONLY: What did you think about the whole controversy with the memoir not being factual or whatever?

R: I think most of the controversy was about his police record, that’s what he kinda fibbed about a bit. I mean honestly, I don’t think that’s what the book was about, his time in jail, it wasn’t about what he did, it was just I think the experience he had as a drug addict going through rehab, and I think that’s the important part of the whole story. I’d read anything else he wrote!

ONLY: Do you have a message for the people of Vancouver?