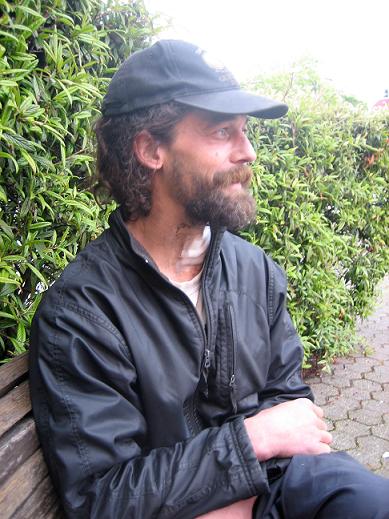 SCOTT WAS ENJOYING THE SUN ON A PARK BENCH IN KITSILANO. HE’S 38.

ONLY: What’s your favourite kind of music?

ONLY: How did you become exposed to that?

S: Well, I have friends who are rainbow kids, hippies. So I started going down to trance nights, I took a couple others. I just ended up going and having a great time.

ONLY: Dancing or what?

S: I didn’t used to like to dance. The first night that I went I was looking around, I’m seeing all these hippies playing drums, and smoking their glass pipes in the club, all around the dance floor, people–freaks of all sorts–just enjoying themselves, getting right off on it, right? I started dancing, and then I let go. I was training with a Shaolin master at the time, so body movement was something that I–

ONLY: You were training?

S: With a Shaolin master.

S: Someone who grew up in the temple in China.

ONLY: Wait, how do you train to do that?

S: Well, what do you mean, how do you train?

ONLY: You said someone who grew up…

S: In a temple. In a Shaolin temple, Buddhist temple, where they practice martial arts.

ONLY: But you didn’t…

ONLY: So then how do you train to do that?

S: What do you mean, how do I train? He wasn’t in the temple anymore, he was here running an acupuncture clinic. And I got lucky and met him.

S: This guy grew up with Jet Li. Jet Li is an actual Buddhist monk, as well. [They] were the same age, they grew up together. It’s pretty amazing to see first hand watch someone like that move. It’s like nothing else. Do you listen to trance music?

ONLY: Umm, well I listen to some electronic music. I like trance in certain situations.

S: Have you heard of Organix?

ONLY: Yes I have.

S: I recommend going there for your first party. It’s a fabulous experience.

ONLY: What makes it so great?

S: Energy. You feel the energy of the whole place, the people. Spiritual, that’s what it’s about, the warrior’s beat. The reason that it uses the warrior’s beat is that it’s the most primal rhythm we can know. When you’re in your mother’s womb, the last thirty days, your heart beat is at about 140 beats per minute. Some people a little more, some a little less. When you’re in your twenties, if you’re a young warrior dancing for six hours, then your heart beat levels out to about 140. There’s no rhythym more primal than that.

ONLY: So you could almost say your connection to trance is biological?

S: All our ancestors have known that rhythm. Every last one of us. So it’s primal. It’s deep inside you. It brings a lot of experience from within, from around you. Is this recording?

ONLY: Yeah it is.