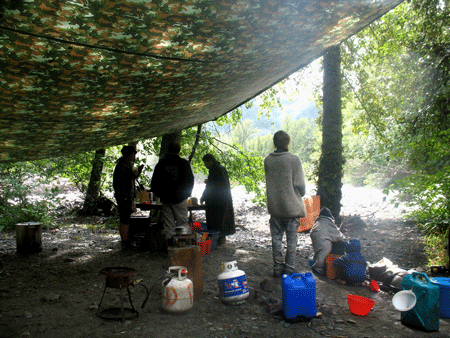 Protestors are the number one security threat to the 2010 Games, it appears to the Canadian Security Intelligence Service. So maybe that explains why officers with the Integrated Security Unit are running around Victoria trying to convince hippies to spy on each other.

But the cops may find that peaceniks and bohemians are too street-smart to play spy games. Vancouver Island long-hairs know better than to give information to police, especially when it’s obvious that no crime has been committed.
“I said to the officer, there’s no way I am going to snitch on my friends!” bookstore owner Robert Garfat tells me, a little indignantly.

The long-time Vancouver Island resident was shocked when he was approached earlier this month by RCMP constable Mike Smook of the Integrated Security Unit. Smook wanted information about Victoria’s No 2010 activists. But it’s not snitching, according to Smook – the police just want to use his eyes and ears.

Garfat was troubled by the encounter and unsure if he should tell others, but then made up his mind that people should know what the police are up to.

“My feeling is that we should say something because if they’re going out into the community trying to intimidate people and to try and co-opt people into becoming informants, that’s like Big Brother,” he says.

A second local activist – who asked not to be named – says the police have come to his door asking to speak to all the residents, as well as taking pictures of everyone who came and left the building.

“None of those questioned had any arrests or previous charges,” the young man says. “The cops friggin’ bothered us for no good reason other than owning literature that is in opposition to the Olympics.”

Others in the community have similar stories. According to several people who contacted us privately this week, the RCMP has succeeded in recruiting at least one informant – a child of 15. She has been cooperating with police for months, they said.

Leaving aside questions of whether this is legal or ethical, the tactic is troubling. If Victoria social justice advocates are so dangerous, isn’t it risky to send a child to spy on them? And if they’re not dangerous, why spy on them at all?

We should all be aware that the police are not gathering information so they can hand out commendations for being great social-justice activists and good citizens. They are gathering information that will potentially put people in jail — preemptively — to prevent them from getting a message to the world about the social conditions here. Why are so many people homeless? Why are so many people in poverty? Why is there a lack of decent housing across B.C. on the reserves? Why are we still destroying old-growth forests for sports events? These are the questions we want to get out to the world, and we believe the police are trying to stop this from happening.

Conducting surveillance and recruiting informants in the absence of any crime violates the Charter, in my opinion. Domestic spying without a clear law enforcement objective does not help national security – it just intimidates citizens who have done nothing wrong (besides criticizing the government.). Fishing expeditions are not legal. Prior restraint on free speech is not legal. Warrantless wiretaps are not legal either, or at least they weren’t the last time I checked.

In fact, we have the right to associate with whoever we want, even with people who criticize the Olympics or take governments to task for ignoring poverty, homelessness and the ongoing effects of racism in our society.

Police statements in the media about ‘consulting with activists’ are nonsense. Their clumsy and heavy-handed attempts to meet privately with individuals are causing controversy, intimidating activists and sowing distrust in the community. There are serious concerns that the police may resort to coercion and bribes to try and force people to inform on their friends.

The BC Civil Liberties Association tried to meet with the ISU for an exchange of views and advice, but backed out on finding it was an exercise in frustration.

“It hasn’t been easy when dealing with the authorities,” said Michael Byers, UBC professor and BCCLA member. “With respect, we have pretty much hit a brick wall.”

“In my view, the ISU … has lost sight of those human rights principles and have focused excessively on the search for “perfect security.”

Alissa Westergard-Thorpe, a member of the Olympic Resistance Network (ORN) in Vancouver, was approached by police last month. She says, “The ORN is not interested in talking with police about the conditions under which we exercise our rights to assembly and expression. They can read the Charter of Rights and Freedoms.”

And if the RCMP can’t be bothered to read the Charter, maybe we should read it to them, real slow, so that they understand.