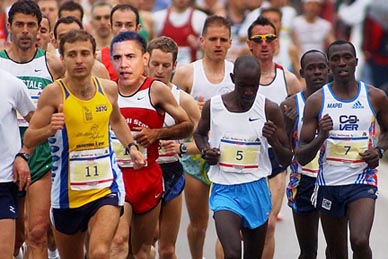 One of the most annoying journalistic conventions in existence is what’s commonly referred to as the switcheroo, in which a writer will take a point that is generally accepted as conventional wisdom and that has been proven to death, and then argue the exact opposite of it. This is a popular thing to do because it’s a lazy way to breathe new life into an argument that’s been beaten to a pulp, thus giving the writer a new spin on a tired issue. It’s also a worthless exercise, mostly because nine out of ten times you can tell that the writer doesn’t even believe in what he/she is saying. Previous examples of these kinds of articles include the idiotic Maclean’s cover story on how the internet sucks, and any article that’s ever been written about climate change not existing. Today’s example, an article on why Barack Obama should drop out of the Democratic primary contest, comes from some Canadian guy named Charles Adler writing for uber conservative website Human Events.

Anyone who has been following this race at all knows that this suggestion flies in the face of every single fact in existence. Obama is ahead in every single way possible, the math for Clinton is basically insurmountable, etc., blah. Calls for Clinton to drop out of the race have been quiet in recent weeks, but after tonight when she doesn’t deliver a knock out blow, they’ll probably resurface. It’s been one of the most inescapable questions of the past few months: “When Will Hillary Exit This Race?” So, who wants to guess how Charles spun this old topic into a fresh, totally interesting new one? Try When Will Obama Exit This Race? Yes! When will that winner simply give up?!

The fun thing about writing articles like this isn’t necessarily thinking up the inane thesis — that’s the easy part. It’s proving the dumb argument that’s always so entertaining. How do you prove a point that not only flies in the face of all conventional wisdom, but is in diametric opposition to every bit of available data? Easy. The first step is to ignore all the facts. Obama may have more delegates, states and votes, but that doesn’t matter. He hasn’t won a primary in two months! “In baseball when you haven’t won a single game in two months,” Adler says, “you are not seen as eligible for the World Series.” Wow, well two months does seem like a long time, and that baseball analogy is fitting, but there’s one big (omitted) problem with this argument: in the past two months there’s only been ONE PRIMARY. Out of FIFTYSOMETHING. This is the same as calling bullshit on global warming because “it’s freezing out today!”

So yeah, oops, there goes the crux of buddy’s argument. He goes on to waste a bunch of space trying to sound funny, the word “dude” gets thrown in the mix, and then he mentions that crazy pastor guy a bunch. Really, that’s all he’s got. He was sitting around in his underwear eating McDonalds, wishing that he’d been born an American, confused his computer for a toilet, and “plop!” Article done. Lazy journalism at its finest.