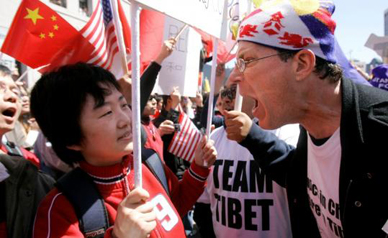 China’s human rights violations – coupled with the ‘Free Tibet!’ and ‘Torches Suck!’ movements – have brought new and deserved attention to the dark side of the Olympic Games in ways that our 2010 Riot Clock could never have dreamed possible. All of a sudden being against the Olympics is the new being against Diablo Cody, and even high-falutin’ news-media outlets like The New York Times are throwing their opinions into the fray. Over the weekend, the Times ran a sort of A People’s History of the Olympic Games article, illustrating how almost every Olympics since Woodstock have been shrouded in a cloak of indecency and unparalleled ‘roid-rage. Summary:

As 2008 and 2010 wait patiently to add inevitable atrocities to this list, the question remains: why do the Olympics still happen? Is giving a hand-full of impoverished athletes and some random city a few days in an international spotlight really worth all of this effort – and bloodshed! Do all the Kristi Yamaguchis make up for all the Back Sundays? Ultimately, the Times concludes that obviously, no, they don’t. The only way to solve the Olympics is to permanently end them.