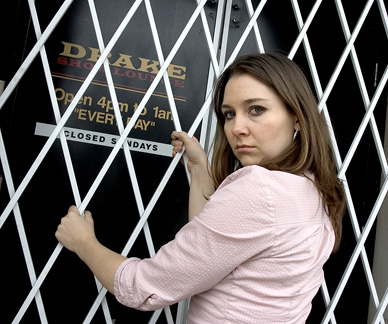 Faced with overwhelming student loans and little options left to her disposal, Ryann Rain decided three years ago to become an exotic dancer. Although it’s not the most common path for someone with a university degree, Rain says the freedom and personal power dancing gave her helped saved her life.

“I was at a low point and [dancing] was the one thing that allowed me to recreate my life and be happy with who I am again,” says the petite 27-year-old. “For the first time I was actually able to pay off my bills.”

By working at clubs across Vancouver, Rain (her stage name) was able to manage her loans and eventually found a steady home at Mugs and Jugs, a New Westminster strip club that was renowned for its friendly and safe environment. But when the province announced in January that it had purchased the 59-unit College Place Hotel (beneath which Mugs and Jugs was located) for $4.9 million, Rain suddenly became unemployed.

Instead of simply being able to move to another club in Vancouver to find work, Rain once again found herself with few options. Over the past few years, exotic dance clubs across the Lower Mainland have dropped like flies as the police pressure clubs to shut down and the province and private developers snatch up the low-income hotels where many of the clubs are located. With too many dancers and not enough clubs in the city, many of the women have had to travel east and find a mainstream job, or cross personal boundaries and go into other forms of sex work they don’t necessarily feel comfortable with.

“Everybody is really depressed,” says Rain. “It’s shoving us farther down the corners [of the sex industry] and we’re living in a society where they just closed the Pickton trial. But [the city] is taking our work away. I’m working private parties. I’m not going into dangerous situations, but at the same time I don’t have three bouncers, a DJ and a manager watching me all the time. So we’re leaving our women pretty vulnerable and they’re deliberately making us more vulnerable.”

Over the past decade, the Vancouver region has seen the closure of the Marble Arch, The Fraser Arms, Club Paradise (now the sometimes opened, sometimes closed Uranus), the Duck, the Ears, the Drake in the Downtown Eastside, the North Burnaby Inn, Golden Ears, The Lougheed, Delanies in Surrey, the Tudor, The Barnet and Mugs and Jugs. The Cecil at Granville and Drake is scheduled to close within in the next two years.

The rash of closures marks a bitter downfall for an industry that once flourished on the West Coast. Just 15 years ago, Vancouver had 35 exotic dance clubs and 4,000 exotic dancers. Perhaps the height of fame came when glam-rockers Motley Crue immortalized the Marble Arch in their 1987 hit, “Girls, Girls, Girls”. But as the internet made sex cheaper and more accessible, the clubs started closing down in the 1990s. Now there are just a handful of clubs left in the region – three in Vancouver after the Cecil closes – and only 200 dancers.

But the more recent rash of closings in the past few years has less to do with downloads and more to do with development. As Vancouver’s real estate market continues to prove extremely lucrative, the provincial government and private developers have been in a race to buy the low-income hotels to which the clubs are attached and convert them into social housing or condominiums.

Aside from Mugs and Jugs, the City of Vancouver bought the 24-room Drake Hotel last July for $3.2 million and private developers are planning to turn the 82-room Cecil Hotel and adjacent 44-room Yale Hotel into condos. But while the provincial and municipal governments tout their hotel purchases as part of their plan to protect affordable housing, exotic dancer advocates say they’re pushing dancers out of the city.

“It all feels like moral cleansing,” says Trina Ricketts, a former dancer and founder of the exotic dancer website NakedTruth.ca. “We don’t have anyone from the provincial government coming to us and asking how this affects us. It’s like we’re [treated] as disposable as the women that are dying on the street.”

The tragic irony is that the province’s attempt to protect the marginalised poor is only pushing more women into poverty. Ricketts adds the police are further exacerbating the problem by constantly doing raids on the clubs. The Vancouver Police Department is especially notorious for showing up at some clubs every day with anywhere from three to 20 officers, then harassing customers by checking their ID, taking photos of their tattoos and searching their cars. They’ve also reportedly burst into VIP areas where naked women are giving private dances.

While the police say they are going into the clubs in order to check for violations on contact dancing, liquor infractions or organized crime activity (the Drake is reported to have had an affiliation with the Hell’s Angels), the end result is that it drives customers away and hurts the dancers’ income. VPD spokesperson Const. Tim Fanning says the police are not trying to target the women, but admits that they’re not talking with the dancers about the problem. When Rain approached the Vancouver Police Board last year with these complaints, she says Superintendent (now Deputy Chief) Steve Sweeney told her that exotic dancers are collateral damage in the police’s war against gangs. But Rain and Ricketts say that they’ve never seen any gang activity in any of the clubs and owners go to great lengths to ensure that there isn’t any violence at the clubs.

But much like how the police’s crackdown in the 1970s against the prostitutes working inside the Penthouse strip club pushed the women out onto the streets (and, some say, into the arms of Robert Pickton), sex workers say the current round of police raids are pushing strippers to becoming prostitutes.

“[Exotic dancers are calling me and] they want to know how to work as escorts, which is unacceptable,” says Sue Davis, an escort and spokesperson for PACE (Prostitution Alternatives Counselling Education). “They don’t want to be escorts, they want to be exotic dancers. So they’ve being forced to choose a sex work avenue that is outside of their physical comfort zone. By forcing them to have to choose other avenues by closing down strip clubs, they’re eliminating some of the most safe and stable jobs for sex industry workers that exist.”

While those in Vancouver’s exotic dance club industry wonder how much longer they can survive in the city, those that run the few remaining clubs say they’re here to stay for the time being. But even though the closures should be helping the clubs by eliminating the competition, it hasn’t guaranteed survival.

“I thought, ‘It’s going to be great, all these strip bars were going to close, and everybody is going to go to the Penthouse.’ But it doesn’t necessarily happen that way,” says Danny Filippone, owner of the Penthouse on Seymour. “Before, when guys would go on these prowls from bar to bar, they would make it part of their stop. But because there’s not these prowls [now], what are they going to do?”

Filippone says the Penthouse, which has been around for more than a half century, is still thriving because it is a landmark in Vancouver and because the club has changed with the times by offering other forms of entertainment, such as live bands and burlesque shows. Partly because of its status and partly because the Penthouse isn’t attached to a hotel, Filipone says the club won’t be going anywhere anytime soon.

But there is less assurance for Vancouver’s other exotic dance clubs. While Tony Ricci, the owner of the No. 5 Orange on Main Street in the Downtown Eastside, says the club closures have helped his business, he isn’t ruling out the idea of selling the place. Ricci says the hotel isn’t listed on the market, but adds that “everything is for sale.”

The future of exotic dancing in Vancouver certainly looks bleak. While Rain would love to continue dancing, she’s not prepared to disrupt her life by traveling to dance across the country. Currently, she can only get work for about one week every month in the city’s remaining clubs, which isn’t enough to pay her rent. Instead, she’s focusing on starting her own business.

But Rain worries about the other dancers who don’t have a backup plan. Many dancers don’t have post-secondary education, and the stigma of stripping means that it’s not necessarily something they can put on their resume. Other dancers have children to look after, and can’t pick up and travel to work. For those who have run out of options, they may look to other forms of sex work in order to survive. At a time when the Missing Women trial is supposed to have taught us the dire need to protect the women in our city’s sex industry, it is painfully obvious that the city, the province and the police are ignoring the safety of women and are continuing to push them into danger.