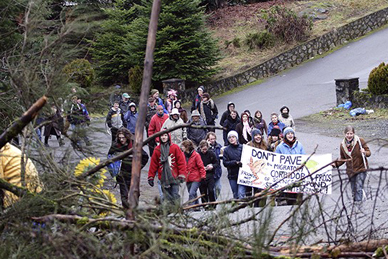 The barricade at the end of the road is decorated with freshly-planted poinsettias in a mound of earth. Yellow plastic sunflowers, two graffitied TV sets and an oversize truck tire line a meter-wide trench just past the pavement’s end. They mark the boundary between the city of Langford and a protest camp occupied by feral humans.

These environmentalists bear no resemblance to the throngs of sandal-wearing, long-haired, peacenik hippy tree huggers seen at Clayoquot Sound in the 1990s and more recently at Eagleridge Bluffs in West Vancouver. Vancouver Island is home to a whole new breed of forest defenders: the Raccoons.

The Raccoons are a ragtag mob of irregulars holding back a major highway interchange project designed to service Bear Mountain, a sprawling golf resort in Langford, just west of Victoria. A few dozen dumpster-diving, trash-talking, anti-authoritarians with a passion for undisturbed natural places have built a camp in the path of the new highway. The proposed interchange cuts through a pocket of forest packed with natural and cultural rarities: a sacred First Nations cave, a seasonal pond, garry oak meadows, arbutus bluffs, red-legged frogs and chocolate lilies.

Right now the Bear Mountain Tree Sit looks like a gloomy, swampy hobo camp, dotted with tents, tree forts at dizzying heights overhead, and a giant teepee covered with tarps. “A tarp-ee,” notes one of the campers. 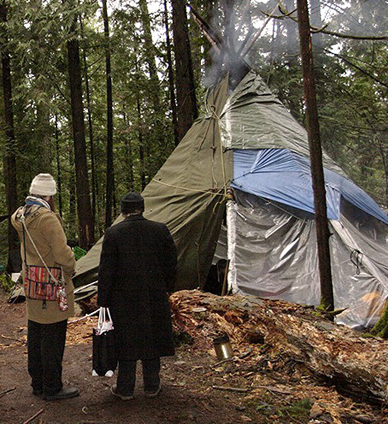 “This is the only example of eco-anarchist action in Canada right now,” says Ingmar Lee, a Victoria environmentalist and camp supporter. “This is the grassroots, and it’s a totally different kind of protest.” Hundreds of people in the community directly support the camp with donations of food, camping gear, and funds for legal defense.

“Just because you fell and died,
Doesn’t mean you didn’t fly.”
-graffiti on a tree platform 30 meters up

Almost all the campers and visitors are under 25, and some are veterans of the Cathedral Grove tree sit protest, which lasted two years and ultimately defeated a BC Parks plan to cut down giant trees to build a parking lot. Here, the first platform went up in April. Five more followed, and they are staffed 24 hours a day, seven days a week.

Kicking the protest camp off public property is a sticky legal issue, and so far no one has moved to start a court case. But Stewart Young, the gung-ho pro-development mayor of Langford, is ramping up his criticism. The mayor’s rumblings peaked with Young accusing the campers of poaching deer and rabbits at the site.

Young said bylaw officers found a deer carcass near the camp in the woods. “We’ve respected their right to protest, but killing deer and rabbits is absolutely disgusting,” Young told the Goldstream News Gazette in December. The city directed the RCMP and conservation officers to investigate and lay charges if they find out who is responsible. No one has been charged.

Two neighbours who live adjacent to the forest said it’s not the campers who are killing animals. “There’s been poaching in this area for decades,” said an elderly neighbour on Goldstream Avenue who declined to give his name.

“We’ve called the conservation officers about deer carcasses a couple times a year ever since I’ve lived here,” said Ron Rayner, a long-time resident who lives just north of the camp and the TransCanada Highway. “It’s an ongoing problem.”

Langford resident Bob Partridge is “skeptical” about the mayor’s claims. He writes, “[J]ust now, as construction is supposed to begin on the Spencer Road Interchange, the protesters/activists who have previously been requesting donations of whole grains, have apparently suddenly become carnivores, slaughtering innocent animals in the woods of Langford?” 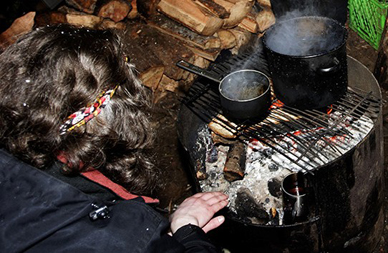 “Are we certain they are also not sleeping on duvets stuffed with spotted owl feathers?” Partridge asked sarcastically.

Some of the campers admit they eat deer, rabbits and even raccoons –but they insist they are not hunting. The meat is road kill collected from the TransCanada Highway, one tree sitter told A Channel News. Another pointed out the hypocrisy of building a highway that will mangle more animals, while simultaneously trying to cast the environmentalists as bunny killers. A third wondered aloud if Stewart Young was vegan.

RCMP and bylaw enforcement officers tell us the campers are “guests of the city of Langford,” and they even allow them to have a campfire without a permit. Back in April, Young huffed to reporters, “They are on provincial land right now and it’s going to be a year or so before we get to the point of having to go there, so they can sit there as long as they want,” The protesters took him at his word and set up a kitchen, where they cook raccoon stew, venison steaks, and bunny burgers.

No doubt the tree sit gives Young a royal pain in the ass, but the blustery mayor has bigger fish to fry. Langford City Council, in a “special” meeting convened two days after Christmas, made the unusual move of adopting two new bylaws, rather than just giving them first reading. One bylaw authorizes borrowing $25 million to build the interchange, while the second exempts the process from the usual counter-petition process, which gives citizens the right to challenge a decision.

The community’s response is a roar of outrage. Many residents of Langford, it seems, are more irate about the apparent abuse of process than about the imminent loss of green space, wetlands, and rare species. Dozens of volunteers are joining forces to canvass the city with a (non-binding) petition to reject the bylaws.

Steven Hurdle of Langford is organizing the petition drive. “While Langford may have found a legal loophole in declaring the interchange a ‘Local Service Area’ to let them avoid the referendum, we can still win the political war,” he writes. “Langford council might find this an albatross that’s unexpectedly hanging around their neck as this issue drags on.”

Back at the camp, tree sitters and visitors are critiquing the City of Langford’s annual levy tour. Every New Year’s, politicos across the region open up their offices to the public, with free booze and food for all.

Well, not quite all. “They only had bag lunches for like 25 people,” one complains. “I got there at the end and there was no more food. So I took all the tea bags that were left.”

Another camper pipes up, “That punch was weak.”
“Yeah, the punch was watered down, so we had to drink more of it to get a buzz.”
“Yeah, that’s why we brought our own cups. We did it up proper with the cups.”
“We asked if we could take their poinsettias with us, but they said no. Then after a while, they gave them to us just so we would leave.”