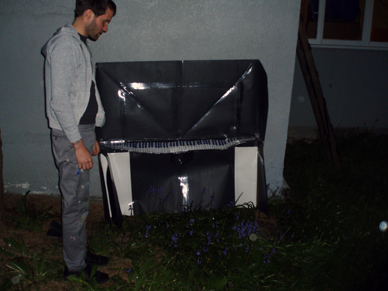 Every show is a practice

A couple months ago I opened for this weird folk-pop band I dig on called OK, Vancouver, OK. Unfortunately, I had to leave early that night and didn’t get a chance to see them play. Somewhat of a faux pas, right? I wanted to amend my rude departure so on my way out I suggested we set up an interview. Some time past, emails were exchanged, OK Vancouver, OK toured and I continued to do whatever it is I do. Then, just a week ago, I found myself being yelled at by some random guy with a beard who knew my name and I swore was trying to sell me something. It was Jeff J of OK, Vancouver, OK. But I really needed a coffee so I rudely ran away… again. I bumped into him later that day and he set me straight. I gave him an apologetic hug and kiss on the head and finally found time to chat with him and long time collaborator, Geoff M.

ONLY: I love the name OK, Vancouver, OK. It’s somewhat ambiguous, but I say it as if you were angrily or reluctantly conceding in an argument. What does it mean to you?

Jeff: Yeah, that’s kind of what it is. I came from an improvised lyric from the first album. I was looking out the window and had just moved to Vancouver but wasn’t sure this was where I wanted to be. It was like, “OK, Vancouver, OK. I’m gonna stay here and make the best of it though I don’t know if this is where I should be.” No matter what it is, this is what it is.

ONLY: So OK, Vancouver, OK is kind of like a philosophy?

J: OK, Vancouver, OK is a four-track project where I just wanted to take it tape by tape. I would start with a tape and make continuous music from one to another. It wasn’t like I wrote a song first and then recorded it. I would just do stuff and go back and find the pieces that I liked. So it ended up that some of the songs had, like, 22 instruments. All punch-ins. Different instruments. The vocals could end up on any track.

ONLY: Do you find that process more fulfilling?

J: It’s more fun. I like to listen to what I do and get idea off what I improvise. How I make the song is how I hear it, a feeling I have.

ONLY: Geoff, what is it like jumping in to this process without a formulated song? It’s not like you are handed sheet music or have been jamming on something.

Geoff: That’s actually what I like playing with Jeff the most, the fact that we do a lot of improv. We been playing together for 6 or 7 years off and on so we have a good ability to read each other. I think think the best shows we play are the ones where we don’t know what we’re going to do and move away a bit from the norm.

ONLY: Do you have a core group of members?

J: It does change, though Geoff M has played drums with me for a long time. Members change time to time. This tour it will be different members but I may play some solo shows if I feel like it. I just want the people playing with me to have fun. We don’t actually even practice — we just perform. So it’s not as if someone wants to join and we have to practice with them. I would just ask them if they wanted to play a show.

ONLY: So you do a lot of improvising live?

J: Quite often. But every show varies. I just want the people I play with to have fun. I don’t really care to be seen as

ONLY: A jam band?

J: If some people think it’s a jam band that’s fine. In my mind it’s choreographed what I want to do while we’re performing. What anyone else is adding to it is just a plus for me.

ONLY: Your music is primarily of folk and pop, both styles that aren’t traditionally straying from a formulated structure. But you described your live shows as being like a practice on stage, experimenting and improvising. Where does that fit? How do you see that?

G: [Laughing] Once a kid asked us , “Hey, can I come practice with you guys?” and I said “Yeah, you can come to every practice we have.” And I think he has. None.

ONLY: Have their been some musicians that haven’t meshed with that kind of performance?

J: Oh sure. It’s never a problem because really OK, Vancouver, OK is about “Okay, that’s what it is and I’m okay with that.”

OK, Vancouver, OK plays at Little Mountain Studios on May 9 and the Lamplighter on May 12.