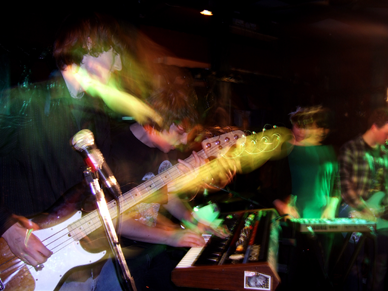 Spring is the best season for starting bands. It’s not too cold to practice in unheated spaces and not too hot to practice in poorly ventilated ones. All that winter blackness is slowly lifting and it doesn’t feel like bedtime at 6:30 anymore. It feels like bike-riding, tequila-sunrise-drinking, see-through-joint-smoking, band-starting time. Yeah! Do it!

Nu Sensae did and they’re not fucking around. Actually, I think they are kind of fucking around. They’re a two-piece with ten songs and three chords. It’s mega punk, and we do love those cute young kids. Cute young kids that spend more time making self-illustrations for their Myspace than they do practicing. But they were still brilliant at the big art party at Emergency Room Strathcona. Not so brilliant: dude who stepped in the big puddle of wet paint.

Drugs are another new bunch of youngsters. Did I already use the phrase “mega punk” in this article? Fuck. Well the same goes for Drugs. It’s like they were teleported here from a time when punk was so crazy that people were really scared of it. But I wasn’t scared of this band because they’re so cute!
Maybe everything just seems cute in the springtime. Drugs played with a band called the Stuffed Animals at the Pub 340 and–awwwww!–they’re the cutest. Once they got their crazy dog heartbeat machine working (love that sinus arrhythmia), they mucked their little paws all over the guitars and drums. The Stuffies are a two-piece comprised of a smushy yellow bunny and a cross-eyed bear. They play sparse-but-catchy noise punk and sweat a lot.

Some members of a no-boys-allowed club called Her Jazz will play at Fake Jazz on April 11 with Invisible Control Panty and Language is OK.
The Ponys and Deerhunter play at Richards on the 11th as well. Why is everything on Wednesday lately?