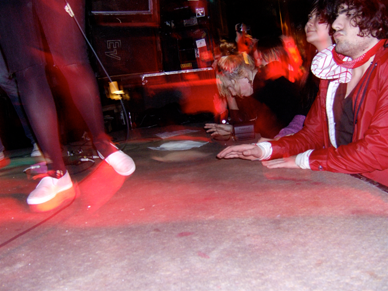 MUM-BUM AND VOCAL POLYPS
Shit. I’ve seriously been trying to get out and see lots of bands, but somehow I’m stuck in a Groundhog Day-style time warp paradox of Mutators and Twin Crystals. I’m mostly OK with that, but it’s probs pretty boring for you to read about the same shit every week. I didn’t even write my column last week ‘cause it would have just been a total flashback.

The Mutes and the Crystals were joined by Defektors and White Lung at the Lamplighter on March 14. Defektors were old-timey punk as usual. They’re funny because they remember their songs by numbers, not names. I remember their songs by the bands they rip off. Like “Oh, this is the Swell Maps song,” or “I hope they play the Wipers one.” I mean, we’re all ripping off bands, right? At least these guys are doing it proper.

White Lung were brilliant and mean. Mish‘s high-waisted jeans gave her a super nice mum-bum and you could taste the remnants of vocal polyps with every scream.

Our heroes played again on the 17th at the Cobalt with Vapid . I missed Vapid’s set, but did get to see them yelling and throwing beer bottles, which is kind of like seeing them play anyways.
I tried really hard to get to the Pub 340 in time to see Cheerleader Camp and the Pockets, but i got stuck and drunk at a staff party and missed them both. Leaving me with, you guessed it, the Mutators and Twin Crystals. I made my co-workers come with me so that I could give you a new perspective on the same old bands. Maryse and Simon both agreed that the Mutators “are not even music,” and Patrick thought they “would be good if they weren’t so screamo.”