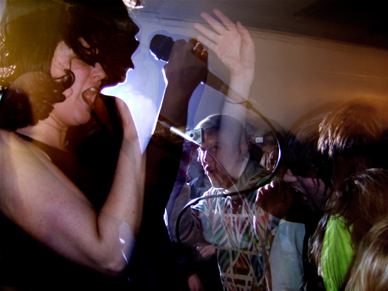 I CAN’T HEAR YOU OVER THE STROBE

Now that I don’t have to make a papery magazine for you, I’m left with a lot more free time to party. After I party, I will write about it here on Fridays and then I will go and party again. On Saturday, March 3, we threw our own party to celebrate getting to party more. It was awesome, but I still smell like cigarettes and the sleeves of my favourite sweater are stiff with the wine and beer that I spilled down my wrists while trying to maneuver through the crowd.

If you look at the old gig posters on No Feeling‘s Myspace, you’ll notice that they’re pretty much the official Only party band. And they fit in perfectly at the grungy, shitty soundsystemy Emergency Room Strathcona. The Mutators‘ new line up is so all hair and sweaty red faces and perfect. Don’t get me wrong, I fucking loved the Mutators with Liane singing and oscillating. Liane does a rad comic for us and makes glittery contact microphones.

The new girl, Leif, is a crazy artiste that screams so punk. While they played it was an all-girl front row and AndrewAndrewAndrew was crowd surfing. Clip’d Beaks played too, and from what I remember, they were awesome. Some people couldn’t hear them over the strobe light. Intense strobing can be a little abrasive, but come on, your in a smoky, cold basement warehouse. It’s already abrasive.

They sounded much better the next night at the Lamplighter. Somehow the Lampy, the ghost that haunts the Lamplighter sound system, left them alone. It did not leave Basketball alone. Luke (who is probably on a plane to Australia while you’re reading this) complained that the drum machine sounded like someone listening to headphones on the bus. Twin Crystals screamed at the small audience until they danced. And unfortunately I missed Cheerleader Camp. But I’m going to go ahead and say they were awesome since I heard some of them helped clean up after our party.