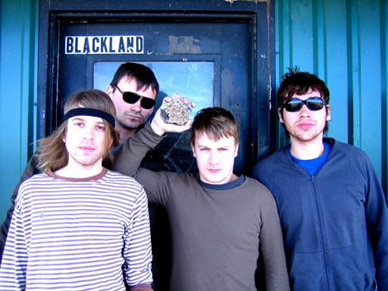 More testosterone in the monitors!

Clipd Beaks moved to the Bay Area from the Midwest a year and a half ago. Within a month of their first show they were approached by Tigerbeat6 (Kid606, Numbers) to put out an EP. Now armed with a brand new unreleased full length, they are spending the next two months touring North America to spread their noise and find a new home. Considering the good luck they had with the first move I would suspect they are setting their sights high for the future. For some reason they really want to get signed to Geffen. What the fuck?

ONLY: Give us the run down on how this began?

Greg Pritchard: We’ve all been playing music together for a really long time. And we met Nick in high school. But he was from the suburbs, kind of the rural periphery of things-

G: Yeah, totally the boondock sprawl… It’s really crazy actually. There is a whole group of kids that we got to know. They started going to our shows when Scott and I were in a band in high school. They were really hyped up about young kids playing crazy music. Now this whole group of kids in the boonies has gone on to be really successful. They grew up in this totally fucked up setting that just produced these amazing creative people. In a way we’re pretty envious because we had easier to access music growing up in the city. It made them more hungry.

ONLY: How did you guys end up in the Bay Area?

G: Well, actually what happened was I moved out here first. I thought the band was going to break up and I just moved for my own reasons. After like 8 months we all realized we needed to keep making music together. So they said, ‘well maybe we’ll move out there’. I didn’t think they were serious so I was like “bring it, move out here”.

G: Literally, a week later they were sleeping on my floor. We lost one person in the move. But we’ve been out here doing the band for around a year and a half now. It’s been really great but I think we’re on the move again. With the tour we are trying to set ourselves up to not have jobs and just ride that wave. We quit our jobs and moved out of our apartment. We don’t have anything to come back to.

ONLY: Any big differences you found between music scenes in Minnesota and the Bay?

G: I think it definitely changed our whole approach as a band. All the bands we were in before were really confrontational, like ‘fuck you’, to everything that was going on. In Minneapolis, we had bands like Husker Du and the Replacements in the ‘80s and I think a lot of people didn’t get over that. But that was because we were younger and we felt like we would get a lot of comments. Like if you brought a mixer or a synth of stage you would get heckled. Supposedly, you can find things that people wrote online like 3 years ago in Minneapolis like, ‘List of heckles that are thrown at Clipd Beaks’ or ‘Best heckle at a Clipd Beaks show,’ such as, ‘More testosterone in the monitors!’