We Love You Mrs. Miller 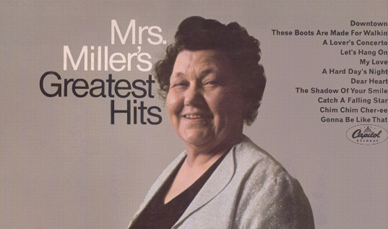 At 59 years of age, Elva Ruby Connes, better known as Mrs. Miller, released an album on Capitol Records called Greatest Hits . It went on to sell 250,000 copies in just three weeks. Appearances on Ed Sullivan, Merv Griffin, and the Jack Paar show would follow, and Mrs. Miller would be hard pressed to admit that she was in on the gag, and actually trying to sound horrible on purpose. Recording sessions were hastily conducted with label execs choosing the worst tracks that often featured Mrs. Miller, out of tune, off beat, or giggling as the background music played on because she had forgotten the lyrics.

Imagine Capitol Records doing anything even remotely as interesting today, like releasing music that was purposely shitty, rather than just shitty.

Let's bust it with some Mrs. Miller:


Mrs. Miller - Strangers In The Night