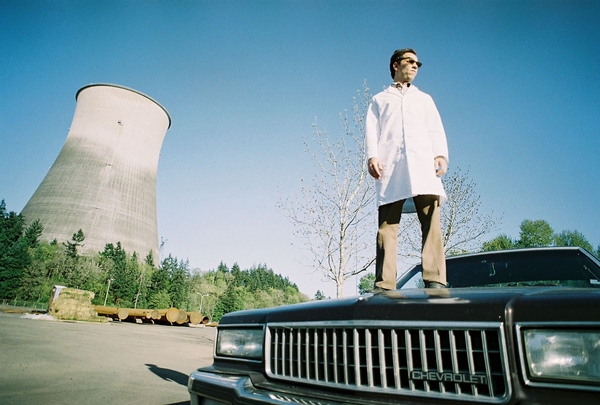 When you watch Mattress, you’re going to have a little bit of a “what the fuck?” reaction. Don’t worry about it, it’s natural. I’d try to classify this music here, but the hyphen key on my keyboard is hooped. There are many online Nick Cave comparisons that use way too many adjectives to describe one dude with a noise machine. I looked at these, but in the end, I came up with my own Mattress reading: Rex Marshall is a fucking librarian. I imagine one day he couldn’t hack the silence anymore so he snapped and made Mattress. I’m really happy that he did and also that he was kind enough to answer a few of my questions regarding this silence/noise dichotomy.

ONLY: The Dewey Decimal System has always stumped me and I have a certain level of respect for people able to navigate that kind of organization. Any tips?

REX: I usually carry a boombox with me in the library. When I get lost, I sit down and hit play on my “I Didn’t Mean to Turn You On” cassette single by Robert Palmer. Then I get the assistance I need.

ONLY: I usually go for a little Huey Lewis and the News in situations involving literature, but to each their own. What are you reading these days?

REX: This week I am reading Last Exit to Brooklyn by Hubert Selby Jr. I am also slapping around some Gary Lutz stories, and sampling an assortment of survival guides… you know, how to survive a nuclear blast, how to treat contaminated water, how to pick bullets out of yourself. The basics, basically.

ONLY: Um…is paranoia something you’ve struggled with your whole life?

REX: I grew up in the cold war, you know, good old nuclear family fun.

ONLY: The last time I went to Portland, when I told people I was from Vancouver the general reply was “you have to move here immediately.” I kind of got the feeling that most people were content to never leave, to remain in their happy little bubble full of breakfast nooks, organic produce, independent press, bikes and babes. Are you nervous about braving the world outside of PDX on your tour?

REX: The cross-Canada tour will be a boatload of fun. I am curious, not nervous, to see how bad it will get. I always assume that things will go badly so I am not caught expecting too much. Maybe on this tour I will hit puberty, and my voice will crack and disgrace me. The good time possibilities are endless.

ONLY: You’re pretty physical on stage. Have you ever rolled/knelt/sat in anything yucky?

REX: I only roll around in the finest organic fresh from the farm mess.

ONLY: “Rex Marshall is a one-man rhythm ace of prison water torture repetitive beats and slippery Casio keyboard progressions.” “If Nick Cave had a bad dream with Suicide on the soundtrack.” I pulled those quotes from various internet sources. A less creative example would be some nerd’s description of your performance at the Pub 340 as “TV on the Radio meets Jim Morrison, but in a good way.” I find these descriptions totally funny and not that accurate. Why do you think everyone wants to figure you out?

REX: It is easy to figure me out. I am a singer. Hey! It is fun to hear the theories. Once someone told me I sounded like karaoke with the midget from Twin Peaks.

ONLY: To your face? Ballsy. So, Reluctant Recordings out of Edmonton picked up your album for Canadian distribution. How did that all go down?

REX: The Doers’ handsome young singer Sean Maxey put me up to it. Said he would make me a star. Said he would solve all my problems and take all my troubles away. Then I met Evan, the honcho of Reluctant Recordings, and we had a good talk about mustaches and I knew history was being made.

ONLY: How much do you charge for a mustache ride?

REX: I think you sent me this question by accident… maybe this was intended for your interview with the Red Hot Chili Peppers?

ONLY: Nope, Nick Cave. I hear he charges a cool grand for a go on that steely black caterpillar. I’d pay more though.

Mattress plays Pub 340 May 16th to mark his Canadian record release and the start of his cross-Canada tour.