Ruby Suns, Four Tet, The Roots, and Someone Still Loves You Boris Yeltsin 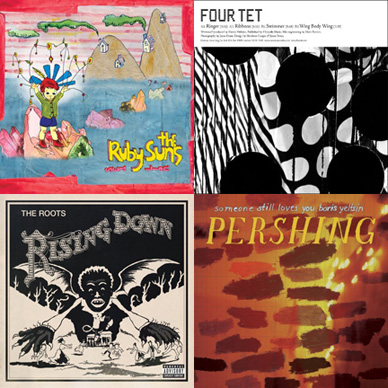 Ruby Suns — Sea Lion
Definitely the best new release since Vampire Weekend. Seriously, the entire staff at Only Magazine agrees. And we are definitely not kidding. We keep telling the rest of those guys at Only: “C’mon. Don’t you guys think that bands like these guys and Vampire Weekend are just mixing tropical themes into their mediocre indie music as a cheap gimmick?” But then the Only guys are all like: “No way dudes. These two bands are the real deal. We guar-on-tee.” And who are we to argue with everyone else at Only Magazine? [Ed: Actually, we think Vampire Weekend sounds like unreleased end credit music from The Lion King]


Four Tet — Ringer
Jeph: Rumour has it that Four Tet was interesting for a week in 1998, but if you have heard any electronic music that wasn’t made from Robert Miles, then you will probably find Four Tet to be pretty uninteresting. There you go. Awesome Jeph Wager just slipped a Robert Miles reference into a review for some mysterious reason.

Meg: Yeah, you’re so mysterious, and don’t we all just wish we could be a part of your special, little, mysterious world.

Jeph: Point taken. Oh, and to remove any ambiguity from my first point, I was saying that Robert Miles is the most boring electronic musician and that a fan of such music might be pleasantly surprised by these songs. Also, I should acknowledge that Four Tet does one awesome thing on here. The song “Swimmer” has an organ chord noise stretch through the whole song. It gives a nice break from the overly quantized and sequenced sound of the rest of the EP. I hope I didn’t sound too much like a real reviewer there.


The Roots — Rising Down
Listening to The Roots makes us both a little bit nostalgic. It’s been almost ten years since we first started going out at a rave in the old Woodwards building, and talking about “Things Fall Apart” that night is probably one of the reasons that we actually talked to each other again after that and eventually ended up getting married. But most of all, it reminds us of a girl we once knew that bragged to Jeph around that time that she had a friend that could understand the words that Erykah Badu was singing in the chorus to “You Got Me”. What do you want to bet that that girl we knew was from Maple Ridge that we no longer talk to her?


Someone Still Loves You Boris Yeltsin — Pershing
Jeph: I think it’s a pretty clear case that if there are six words in your band name you should just give up and end it all.

Jeph: Obviously. Everyone loves Yeltsin. That’s another reason the band name is so bad, unless it’s a clever reference to some cool thing I’ve never heard of. But, barring that possibility, this album is one of the worst things I’ve heard in my life. And I’m pretty sure this is the band from the Tom Hanks movie That Thing You Do! (And that exclamation point is in the movie’s title. I wasn’t ending that sentence that way).

Meg: Actually, I’m pretty sure you’re wrong. The band that did the music for That Thing You Do! is Fountains of Wayne. Everybody knows that.

Jeph: I’m not saying these guys did the music for that movie. I think they’re the fictional band that the movie was about. Actually I don’t just think so, I know it as a fact.