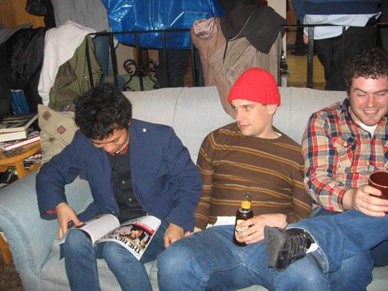 You’ve got to laugh at bands that pick weird imaginative names as a result of retarded inside jokes or awkward moments at gas stations. They think they’re being funny and cleverly inventive but really they’re just setting themselves up for interview after interview answering totally irrelevant questions about a topic that has nothing to do with their music. It’s a total nightmare really, and as predictable as the crazy bag lady outside my office who asks me for quarters every time I walk out like it’s the first time she’s ever seen me. But that’s what you get when you decide to name your band something totally random and nonsensical and it explains why Matt Hunter of the bizarre Portland folk three-piece is so at home talking about all things “Meth” and “Teeth.”

ONLY: Have you seen the crazy old man that makes crystals to ward off giant lizards from taking over the world lately?

MATT: Actually that was my friend Schyler and his band Reptilian Civilian that knew the crystals maker. But you wouldn’t believe how popular that theory is with people here. I had no idea, YouTube “shape shifting reptilian” or “reptilian agenda”. I still meet people at parties that believe in it every once and a while.

ONLY: What else should crystals be used to ward off?

MATT: Oh man, there’s a whole crystal underground thing that I wasn’t aware of until recently. Apparently if you are all new age-ish and believe in them they can solve anything for you. But mostly I think they’re just the only hope for a lot of people who don’t have health insurance. Maybe I need to invest in some.

ONLY: How many cavities do you have?

MATT: I’m pretty much cavity free, which is just pure luck I think.

ONLY: When you were a little kid and went to the dentist did you get a toy at the end? I always picked the ring, what did you pick?

MATT: I don’t remember that part. I’m one of those people that anesthetic doesn’t work very well on. So I mostly remember that part and the part where the dentist and the assistant talked about how he was getting a divorce. Why would you say that stuff around a six year old? I mean, all the creepy details too. Jesus.

ONLY: How much joy do you get out of the fact that people who google “Meth Teeth” without mention of the word “band” end up staring at gnarly images of rotting junkie mouth? Is that the best part about having that name?

MATT: [Laughs] No, I feel bad for them. Sorry. I think the best part is having to stare at the ground when I tell my family members what my band is called. Or the part where I get asked a million questions about meth in interview type situations.

ONLY: Well in that case, in honour of your band name and our city, let’s talk about meth… Have you ever done it?

MATT: No, I’m not a big fan of uppers. They make me feel like I’m going to have a heart attack. I stick to drinking. I guess that makes me a poser.

ONLY: If you did and got really good at it, would you prefer to live in a garbage can or a giant fridge box?

MATT: I would do it for reals and go ahead and have a kid or two and live in a trailer in Irrigon or near the Umatilla Chemical Weapons Depot. There’s a nice trailer park I look at whenever I go through there that overlooks a sewage treatment plant. That’s my meth dream!

ONLY: You have a song called “BUS RIDES.” Taking the bus in Vancouver’s downtown eastside might be the easiest way to see some real Meth Teeth. Are there lots of drug addicts in Portland for you to get inspired by?

MATT: I’ve been to your ‘downtown’ and you have some pretty epic junkies. Meth seems to be a small town problem more than anything here. So not so much in Portland itself but if you drive to like say… Vancouver, WA (5 min away) you can drive around and catch a whiff of that cat pee smell sometimes. Or like where we all grew up in Eastern Washington — the only way to pass the time out there is to do tons of meth and have kids, oh and maybe work at the french-fry factory.

ONLY: And on the topic of our city, how did you get involved with Sweet Rot Records?

MATT: Pure luck! Sent out some demos and Jeff from Sweet Rot liked them and that was that. Totally amazing considering we made those recordings 2 days after me and Kyle started practicing. Those are the recordings that are now on the 7’‘ we just put out.

ONLY: Is it a match made in heaven between you and Sweet Rot Records, considering your names are both about decay and disintegration?

MATT: That’s pretty weird huh? We agreed pretty early on that the band would not be a “meth” or “teeth” themed band but with coincidences like that, there are obviously forces beyond us that are in control.

ONLY: What’s the title of your upcoming full length on Sweet Rot?

ONLY: Is Meth Teeth better than any of the other bands (Artificial Limbs, Leper Print, and Night Wounds) you all play in?

MATT: Totally different. None of the other bands we are involved in sound anything like Meth Teeth. But in my eyes, they shouldn’t be a surprise when you hear them. We/They are all going for the same thing, just in different ways. There’s my political answer to your question [laughs].

ONLY: You seem to really like the tambourine. Will there ever be a Meth Teeth maraca or maybe even a cowbell?

MATT: Cowbells are played, egg shakers are cool, woodblocks are cool and handclaps are dead.

MATT: I watch cat videos on YouTube a lot. But I think everyone secretly does that. I’ve noticed that Japanese cats are bred to look like Japanese cartoon cats.

ONLY: A fan of yours said listening to one of your seven inches “helped him defeat mono”, what else can listening to it do for you?

MATT: You have really done your Myspace research… Probably just bum you out. That’s our super power, bumming out lives.

ONLY: You have people who go by zombiehamburger, welltunedpiano and Yedna listening to your music, in your experience what sort of people like Meth Teeth?

ONLY: Are you excited to be playing some shows with Naked On The Vague while they’re up here from Australia?

MATT: Yeah, they are fucking great and very interesting. All the bands we are playing with are good. It’s an awesome bill for sure!

ONLY: Without looking, how many balloons are there on your Sweet Rot seven inch?

MATT: Shit man, I’m not sure. 7? I remember thinking there wasn’t enough initially and freaking out. We added more. That’s why it turned out well — lots of balloons.