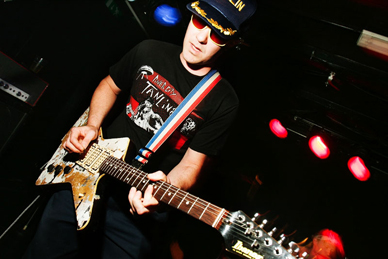 Best LOVER! You’ll Ever Have

I know Tuesday nights are normally reserved for wallowing in hangover sorrow – a time to reflect on why you thought it was a good idea to drink that extra double, and the six after that, not to mention how in the hell you managed to wake up next to that weirdo with the blinking problem from the line at Megabite – but next week you’ll have to rearrange your schedule. Move all that to Wednesday, because on Tuesday, Lover! is in town. A power-pop explosion from the sweaty palms of Rich Crook, Lover! is the next installment of rock ‘n roll debauchery from the demented dynamo that helped spawn The Reatards, Lost Sounds, American Death Ray and Knaughty Knights. In honour of the fact that Crook collects roving musicians to play in this latest project as easily as you or I gather packets of soy sauce from Japanese take out, Only decided to talk to Billiams, Lover!’s current drummer about “joining” the Memphis band and the upcoming tour…

ONLY: So how did you end up in Lover!?

BILLIAMS: Road dog… best drummer around??? Naw, Me and Rich are old old friends from the Tard’s days. I knew he needed a drummer, I asked him, and he said yes! Hope it turns out OK.

ONLY: Who else will be playing in the band with you besides Rich? Will Greg Roberson (ex-Reigning Sound, Arthur Lee’s LOVE) be along for the ride or is he just a collaborator on Lover! recordings?

[Of course I know he won’t be, but any chance to name drop the prolific Roberson in the hopes of getting lazy Vancouverites out on a week night is worth the effort of using italics.]

BILLIAMS: No Greg. He’s a family man. He’s got a kid at home and a pro radio DJ gig. As far as the rest of the band, It’s Rich, Talbot Adams, Johnny Vallant and I – Talbot and Johnny being from The Black And Whites, our tour mates. DOUBLE DOODY!!!

ONLY: So all of a sudden you’re in this new band, what do you actually know about Lover!?

BILLIAMS: Richard told me about starting up the project about one year ago this past March when I was in Mem-Phis on a Ponys tour. …..and now here we are.

ONLY: Have you ever had a run in with “friendly animal poachers or in-the-closet crane operators?”

[Take a look at LOVER!’s Myspace profile if you want a little background here.]

BILLIAMS: Naw, Rich is the oil rig guy/southerner. I grew up in the Land-o-Lincoln…. All right, there was a little poaching down state.

ONLY: Rumour has it Rich has quite a thing for garden gnomes. How do you feel about them? What if Rich brings them on tour?

BILLIAMS: FUCK! I did not know this. No gnomes in the van! Takes up too much precious cargo space.

ONLY: Do you think the “!” is key to the entire feel of the band?

ONLY: Does playing drums for someone who played in the Reatards excite you?

BILLIAMS: No not at all. I’ve played drums for the ‘Tards as well. I’m just excited to play in a killah band brah!!

ONLY: You’ve played in the Baseball Furies, LiveFastDie, Hot Machines, Vee Dee and Lover!, how the fuck can you keep all the songs straight?

BILLIAMS: And The Spits. Drums are easy – that’s why I’m a whore.

ONLY: You were in Vancouver a month or so ago with LiveFastDie, any observations about the city?

ONLY: What are you expecting touring with The Black and Whites to be like?

BILLIAMS: Rolling party. It should be good, Talbot is one of the nicest men I’ve had the pleasure to meet.

ONLY: What’s your position in the tour van?

And for that answer check out Lover! with The Black and Whites and Master Apes when they play at Pub340 on Tuesday April 22nd — EARLY SHOW, 9:00pm sharp.