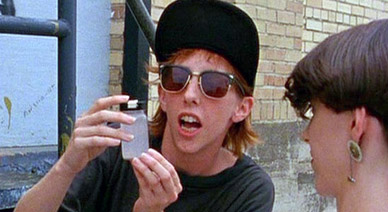 The annual awesomest-time-ever that is SXSW is happening right now in Austin, Texas. We managed to muster up enough journalistic clout to score an actual press pass to the thing. How? No idea. We’re still dumbfounded. Since Logan just got fired from his job and is dead broke, we decided he would put this golden ticket to its best use. It’s hard to know how much to expect from Logan. He definitely headed down to Austin with the best of journalistic intentions, but then … well, he must have drank the Kool Aid or something. Here’s his first “report.” By the way it sounds like things are going, we’ll be lucky if he makes it back without multiple statutory rape charges.

“Well, looks like Lou Reed was lipsynching and all the drinks are free. I still have my camera, but I don’t have a scanner. I have mad polaroids. I haven’t eaten anything but an orange in 12 hours. The last show is supposed to start but we are waiting for N.E.R.D. It’s like rape after dark. The streets are empty right after the bars let out. $4 slices of pizza? Sucking. Seattle is mad white. Austin is feeling good.

Thursday: I have been hanging with cool kids and MGH and Krames. We went to a small-small shitty bar called Trophy where Tony and Jason played 1/2 alive edits. It was cool. Marek and I just passed out in the grass for like 30 minutes. 30 minute sets.
Free American Spirits, free American Spirit period. Mad expensive everything else.
Cannot wait to jump in the pool and listen to No Age Live.”