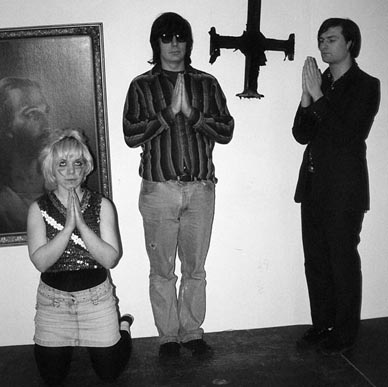 When Nikki from Terror Bird told me that she would only grant an interview if I asked really assaulting questions, I got ready for some fun. “Our hearts are unbreakable, because we don’t have any,” she assured me. But then our emails were so entertaining that we never actually got around to meeting in person, and since the combative nature of our conversation was so fucking hot, I hope we never do. She even spelled my name wrong, that bitch.

ONLY: So what the shit is up with the face paint? Is it some homage to a dead relative or something?

NIKKI: The face paint is actually more of an homage to my personal feelings. If you take a quick glance at [bandmates] Jeremiah or Jesse, you’ll notice they don’t have face paint because their feelings are different from mine. I’m deeper, thus why my “paint”, or makeup, as I call it, looks like deep, hot pink wounds. Anyhow, Jesse and Jer show their pain or delight using invisible makeup. A bit less physical, which is good for all of us.

ONLY: Hey, since you’re such a fan of metaphor and feelings, maybe you can help me with this lyric I’m stuck on. It starts, “Your love is like…” but then after that I’m totally stuck. C’mon: Your love is like _________. Okay go!

NIKKI: Yeah, okay I did go to the Van Halen concert. How did you know? My only defense is that I didn’t pay for my ticket. How long have you been following me for Bryanna?

ONLY: Well, I saw you open for a white rapper from Whistler at the Lamplighter quite a while back, but then I introduced myself to you and you acted like a standoffish cunt. After that, I subsequently missed you at like eight more shows without knowing it. I guess I’m just not one to show up to a party to see the opener for the opener for the opener. I didn’t know you were Terror Bird until like yesterday.

NIKKI: We didn’t know the white rapper was from Whistler, or we might have never done that show. We hate mountains because they are pointy. Why did I act like a stand-offish cunt? Either because A) I am shy/awkward sometimes and feel weird when people say nice things to me because I had acne and boobs when I was ten, so boys made fart noises when I sat down, so why are people being nice now and is it all a ploy to play another cruel trick on me?, B) I had to go to the bathroom really bad. I can’t have a conversation when I have to pee.

ONLY: I like how you talk about your pee.

NIKKI: I’d much rather be a gay icon than a uropath.

ONLY: Speaking of gay icons, do you miss Heath?

NIKKI: Let’s just pretend you’re saying Heathcliff instead, and I’m Cathy and we’re in the song “Wurthering Heights” by Kate Bush, doing pushups together. If that was the case, I’d have to say I think I’ve almost moved on. And I have a 7” coming out in April so hand over your fucking wallet like you did for the Beatles greatest hits CD.

ONLY: And if by Beatles greatest hits, you mean Beatles LOVE the remixes, then yes, yes I will. The Blackbird/Yesterday mashup just blows my mind. You’re playing Valentine’s Day at the Bourbon. What’s your worst Valentines Day experience?

NIKKI: My most gut-wrenching Valentine’s experiences are made up of pretty much every V-Day I existed on between the ages of 12 and 17. Ugly ducklings only get cartoon Valentine’s Day cards. They don’t get to wear evening gowns. But now, shame is on my side! Jeremiah has been making up for my teenage years. He knows how to french kiss and everything.

ONLY: You know, I don’t think being ugly in high school is really the worst thing, it keeps you out of trouble. I mean, I was a fat girl and I stayed a virgin until I was 19. And where else would you have gotten all your angst for your tunes? Is it safe to say you prove angst ain’t just for the teens?

ONLY: Whoa, and I thought 19 was late, you’re pretty much a nun!

Terror Bird opens for the opener for We Are Wolves Tuesday at Pat’s Pub.