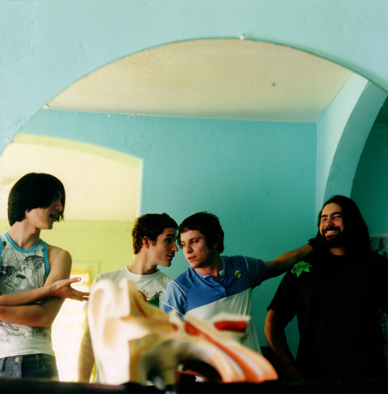 Be it by increasing your fruit and veg intake or wearing condoms more often during encounters with the usual prostitutes, the new year often inspires one to strive for wellness and a fresh outlook on life. Personally, since having the opportunity to speak with John Famiglietti of L.A. noise project HEALTH, I’ve made a resolution to improve my interviewing technique. This sweet, happy man was unprepared for (and probably undeserving of) my aloofness and offensive questioning. All culture clashes aside, like you would expect from an internet famous hype band, we mostly chatted about internet fame, hype, and the L.A. DIY scene. I’m sure he felt pretty lame about it also, but efforts to change the subject to more interesting topics failed miserably. Alas, my poo jokes just went way over this guy’s head.

ONLY: So John, what do you contribute to the world on a day-to-day basis?

JOHN: Hmm, probably a whole not, I don’t think. On a day-to-day basis, um…

ONLY: C’mon! Your life purpose?

JOHN: Oh my purpose? Oh! Oh I thought you meant like what I’m actually contributing…

ONLY: No, no. That was supposed to be an icebreaker.

ONLY: Well [cough] is there anything that you would rather talk about first?

JOHN: Uh, yeah, what is this Only Magazine? Are you a Canadian magazine?

ONLY: Yeah, w’re based out of Vancouver.

ONLY: That makes one of us! Y’re pretty good friends with another Canadian band, Crystal Castles. What’s the love story there?

JOHN: There’s not a huge amount to it. Pretty much we discovered them on a really great blog called 20jazzfunkgreats, this was a long time ago, this was like two years ago. And we got really excited! And, through MySpace courtship or whatever, we talked to them about maybe doing a remix, which actually didn’t get released until this year, but its actually a year old.

ONLY: Crystal Castles had kind of the stereotypical MySpace fame, it was really immediate. Whereas I’ve heard you guys do lots of free shows. Are you more into the performance promotional thing, as opposed to the interweb relations?

JOHN: Haha, yeah, we’re really into performing live. When we were coming up, or whatever, we used to play a lot of shows. An incredible amount. We don’t do that anymore. If you get on a bigger show they the promoter won’t let you play more shows. But we did play unannounced at [L.A. venue] The Smell a few days ago for new year’s.

ONLY: Do you have any new year’s resolutions?

JOHN: Yeah, I had a lot. They’re all dumb things though. You know, lose weight, exercise more, oh and I really wanted to learn how to make salsa.

ONLY: Yeah I plan to drop a few pounds as well, but not by exercising. Mostly by smoking parliaments and drinking herbal tea.

JOHN: My secret is Kombucha tea. It actually does help you lose weight [ feckin gross!!! ].

ONLY: I don’t know if that’s the healthiest way to lose weight, but sometimes I read Cory Kennedy’s blog too, it gives me the shits.

ONLY: I guess you didn’t hear me, we must have broken up. So is The Smell your regular hang?

JOHN: Yeah. The best thing about L.A. is that there are lots of venues for DIY events. There are lots of other smaller places around Echo Park that have DIY shows too. In L.A. the scene here is really active. There’s like five DIY shows every week, or more. There’s no running around, or shows getting canceled, and its rare that there are house shows. Yeah, the L.A. scene is just ridiculously supportive. It’s a really, really good place to make a band, because there’s so much community and so much stuff going on. It’s almost too supportive. You really don’t even you pretty much get support whatever you do. It’s a really good scene.

ONLY: That sounds, um, really good. I guess its one of the only cities that really has the population to support that too.

JOHN: No. Baltimore is a lot smaller than L.A. and they have a really great scene with a lot of great bands.

ONLY: Point taken. I’m fascinated with developing cities in The States. In places that are lacking in industry, where the price of living is going down, there seems to be a lot more creative effort.

JOHN: Yeah I think that’s the best case with Baltimore. I mean, Baltimore has gone so fuckin’ down the tubes that you can literally do whatever you want. A friend of a friend of mine bought a bank for a hundred dollars and they own it outright. That’s how fuckin’ poverty fuckin’ stricken that city is. So people there literally can do whatever they want. However, you have to live in shitsville and its really dangerous and crazy.

ONLY: A friend of a friend, eh? Bullshit. So what are you planning on smuggling into Canada?

JOHN: Nothing. The Canadian border is so fuckin’ insane. Pot is legal there- what do you need to smuggle?

ONLY: Yeah, pot is legal, but we don’t have any Heath bars up here, so you should bring some.

ONLY: We just don’t.

JOHN: You want me to bring you some Heath bars?

ONLY: Yeah, you know you have to represent your namesake.

HEALTH and White Williams play the Media Club on January 23. I was promised a Heath bar so I’m going.