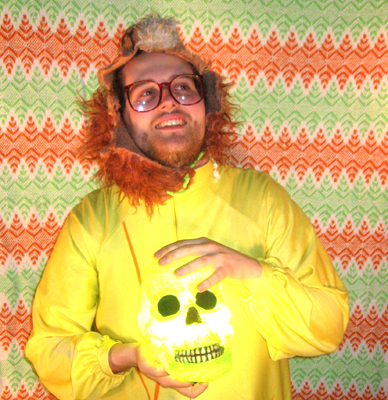 I was recently lucky enough to have music-maker/performer Dan Deacon answer some questions for me all the way from Scotland, where he was on his European tour. Nice! By the way, the interview was conducted in the form of an email questionnaire, so all my segues and comments on his answers are made up after the fact.

ONLY: Last month, I was listening to a New Jersey radio show (“The Best Show on WFMU”) and the host and guest (Tom Scharpling and Fred Armisen) were trying to name things from Baltimore. All they could come up with were John Waters, The Wire and Dan Deacon. Congrats on being such a Baltimore icon, what’s it like?

Dan: I don’t think I’m a Baltimore icon. I would say Nautical Almanac or Oxes or Dan Higgs are much more ‘Baltimore Icons’. I’ve only lived there for like four years. I love the city very much and call it home, but being an icon might be pushing it.

ONLY: Very modest. Is your life more like The Wire or a John Water’s movie?

Dan: It’s like a Wire episode directed by John Waters, but if The Wire was a show about a bunch of jerk friends living in colourful squalor, and if John Waters was a human-sized living dog. And if it was called Fishlord.

ONLY: Speaking of your friends and living situation, what is “Wham City”?

Dan: A group of dick-heads acting like hot shit for no good reason. Also an art collective.

ONLY: You mentioned conditions of squalor, have you become very rich from your music?

Dan: I don’t think rich is the right word. But for the first time in my life, I don’t worry about if I can pay rent or buy food. I used to get all my food from the dumpster and live in a total shit-hole warehouse. It’s nice to buy healthy food and live in a decent place. I still don’t buy anything that I don’t need. Money is the beast that kills all truth.

ONLY: Sounds about right. Let’s move on to your music. Did you ever have any embarrassing musician pseudonyms, like Firestarter, or ERROR MESSAGE, or Glitchinator or anything like that?

Dan: Nope. I wish I had all those names. I just always used my name. I played in a lot of bands at Purchase [College]. We would try to come up with several bands a week and would keep the ones with the worst names. I think NORDIC POPE still wins out.

ONLY: Purchase? That’s the music school you went to in New York. In my experience, a lot of people that go to music school are just there so they can learn how to cover John McLaughlin songs or so they can meet other Frank Zappa fans, but you are doing the whole Dan Deacon thing. How did that come about?

Dan: Purchase was a really weird place. It was a bunch of small conservatories for the arts on one campus, with a liberal arts school as well. My undergrad program had five other people in my class, and the masters program was similar. Since it was a composition program with a heavy focus on experimental and avant-garde composition, most of the people there were wicked. The best part about the school was the exposure to the students in the other programs. All of the people who started Wham City went to Purchase and moved down to Baltimore after we finished school there.

Dan: I like to listen to my friends’ bands a lot. I’ve been really into Simon and Garfunkel lately. Its just so nice to chill out after a crazy show to those pretty little guys. But the music I listen to on tour and the music I listen to at home are totally different. I have my records at home, and on the road I really just have the CDs that people give me or a friend’s iPod or something.

ONLY: What do people not know about Dan Deacon?

Dan Deacon performs on January 21 at Richard’s on Richards.