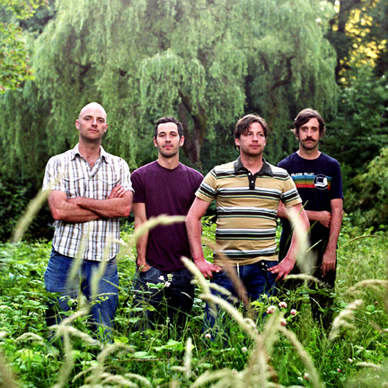 Ryder Havdale just got back from an event-riddled tour (Van problems again!) with his band, the Mohawk Lodge to promote his new Darryl Neudorf-produced album, Wildfires. His spirits were high when I spoke to him, and he was a lot hairier and gearing up for a homecoming show at the Railway Club with Octoberman and Leah Abramson. A quick history of Ryder: he has been in the great pop act Kids These Days and he is the owner of the local label, White Whale Records. I stuck a recording device in his face the moment he returned.

ONLY: Can you convince me that touring is not a complete waste of time and not a pain in the ass?

Ryder: Well, it’s amazing going on the road. We went with Octoberman, and watching how much better they got after playing 24 dates in a row was amazing. I can only think that our band made the same leaps.

ONLY: But I thought – what I’ve been reading in the blogs about your tour – that you had problems with your van and a couple of people had to stay with it. Were your bands not depleted for a good chunk of the time?

Ryder: Well, yeah. Cory and Leah did the first mission, which was hanging with the van. They missed one show, then they caught up to us in Edmonton. Then four people had to go back to get the van. We rented a car for them to catch up to us. They drove the car 10 hours to Kelowna to pick up the van. And while we played Saskatoon, Winnipeg and Thunder Bay, they drove a day and a half, 35 hours straight, to catch up to us in Thunder Bay. Those three days I played Octoberman’s bass-lines and Marc (from Octoberman) played our bass parts. It was a gong show but Thunder Bay, the third show, was like a dance party. Everybody caught up, and there was never any complaining, and it almost made the tour stronger.

ONLY: Is Thunder Bay getting away from the title of the town you avoid when you tour Canada?

Ryder: Thunder Bay was one of the best shows. There were people there for both bands and there was some Kids These Days fans as well, so we played a couple Kids songs. We slaughtered them, but everybody had a great time.

ONLY: I wanted to ask about the direction of the new album. There was this quote on the New Music Canada site that described the new album as white boy indie blues.

ONLY: Yeah, I was going to ask, who is Arch?

Ryder: Arch used to play in Ready Made, and he has this monster guitar sound. Then we started playing electrics versus acoustic guitars and went from there.

ONLY: I was going to ask you about the label. Is it not the toughest job?

Ryder: It’s the challenge that makes it fun.

ONLY: How long has it been going on for?

Ryder: Three years. I thought after a couple years I’d be able to hire all my friends….

Ryder: Yeah, I went in to it pretty blind, not knowing what it was all about. Now, I’m pretty happy with where it’s at, but it’s still a long way off from being able to say all our artists are making money. It’s a constant learning experience.

ONLY: Is there one trait about you that makes it easier to have your own label. I remember seeing Kids These Days at Richard’s on Richards and you filled the place. Are you a good word of mouth guy?

Ryder: I think I’m pretty good at PR. I run the label and play in the band, so I think I have a good mix of head and heart.

ONLY: I was going ask about the CMJ showcase. Where did you play, and who did you play with on the roster.

Ryder: We had a label showcase at the Knitting Factory with Culture Reject, Octoberman and the Mohawk Lodge. It was a great turnout. It was funny because I lost my voice two days earlier, and by the time I got New York, I had nothing but a whisper. When we got on stage, Arch covered the singing, and I covered the low parts. We left for Ottawa right after the show, so we really didn’t get to enjoy CMJ.

ONLY: Anything coming up in the future.

Ryder: It’s funny that you asked, because we are going in the studio with Jordan Koop. He’s bringing his RADAR and we are going to his cabin to record off the floor. We are really excited.