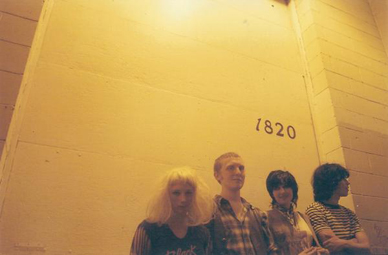 Most 17 year olds aren’t out on a weeknight playing in a band at a bar. Chances are they’re probably at home studying for exams or jerking off to pictures of Lindsay Lohan – at least I know I would be – but that’s obviously not the case for The Petroleum By-Products. And while I pretty much despise the term “dance band” these kids have given me new hope for this type of music. Their songs are catchy with a sort of “could-care-less” attitude and I can’t help but hope that they’re playing wherever I end up every weekend. I decided to interview Sally (guitar/vox), Robin (drums), Vanessa (keybs/vox), and Aaron (bass) to see what The Petroleum By-Products are all about…

ONLY: How did you guys start the band?

ONLY: Where did the name The Petroleum By-Products come from?

Sally: We wanted to start a plastic band. (giggles)

ONLY: Is it true that Justin from the Mutators saw your first show and told you to get a new drummer, so you did?

S: Yeah, Robin was at that show, so we asked him right after Justin talked to us.

ONLY: How did you tell your drummer at the time about your sudden decision?

S: We didn’t. We just said we weren’t having any practices anymore!

ONLY: How would you describe your sound?

V: Louis Armstrong once said, “Good music is music you can tap your foot to.”

ONLY: Other than shows at bars, have you played anywhere else like at a talent show or school dance?

S: Yes, we played a talent show at school with KKK Masks on our heads!

V: We got third, we didn’t accept our prize.

Aaron: White Lung is great, we all hang out and read astrology books before playing.

ONLY: Are you recording anytime soon?

A: Those songs on our Myspace site were only recorded so we could remember how to play them.

ONLY: When do you play next?

A: Shindig at the Railway Club on November 20th.

Actually, they play the after party for Only Magazine’s “All The Covers” art show at the Astoria on November 9th