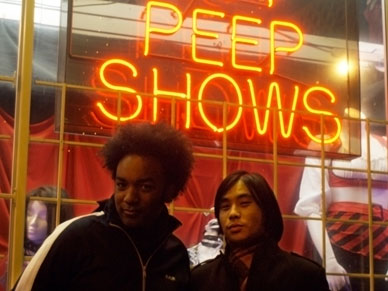 Until their name appeared on a poster for a show at Library Square’s Casbah!, I had never heard of Culte Du Cargo. And why should I have? They had only played one show prior to that, and it was their CD release. The collaboration between Alfa Ming and Felix Fung that crafted the 11-song Image Talk hints at soul, hip-hop, and largely new wave influences. And I’ll just assume some guy named Gene Pitney.

Alfa: That’s a good place to start. Gene Pitney is a pop artist that influence Marc Almond from Soft Cell. He’s a crooner. When I started talking to Felix [about this collaboration] Soft Cell was one of the first records we put on. And not just like ‘Tainted Love’ or anything.

Alfa: Right. I was like, “Wow, I’ve never heard this before.” It was a little more like what I was looking for. Something that was wasn’t so immediate and played out. And once you start digging a little deeper you’re like, “How the fuck did they do this?” And you dig a little more and you find out they love Gene Pitney. So I go and study Gene Pitney, I listen to his stuff and begin to find the thread between him and all these other artists.

ONLY: Was that how Culte Du Cargo started? Listening to records?

Felix: It was a job. I was looking for work.

ONLY: How do you mean? Playing music?

Felix: No, I record other people. I was going to produce and album for Alfa.

Alfa: I was looking for a producer.

ONLY: So it started as a solo project?

Alfa: I had stuff that I had done with other producers as a solo artist, but things weren’t clicking and I wasn’t feeling inspired. I didn’t quite know what I wanted to do. So we met, sat down and thought this could be a good situation. He has a studio, he’s a producer, an engineer, got a good vibe. By the time we sat down and really got things going I just went from there.

ONLY: Those songs you brought, did they they change drastically?

Alfa: Drastically! The songs were all let go.

Felix: I think it was because the other stuff, or at least where I thought Alfa was going anyways, and where I was willing to go, there’s just a point where I don’t want to do a hip-hop album. It’s just not my thing.

ONLY: Is that what you normally do, Alfa?

Alfa: I was into hip-hop pretty heavy.

ONLY: And that’s what you brought to him?

Felix: We were supposed to work on that first, I think.

Alfa: But the music I brought was not necessarily the same as the music I was interested in making. So Felix proposed doing something else.

ONLY: So what clicked in your mind that made you completely abandon making a hip-hop record for something different?

Alfa: Well we sat down, put on some records and both responded to the same thing.

Felix: It was more like hanging out. It seemed like he wasn’t just limited to doing hip-hop and we both got excited about stuff. He didn’t come at me aggressively about doing a hip-hop record, which was good because it was nothing that I really wanted to do. And I convinced him that he didn’t want to do it either.

Alfa: I think that helped. It was a big moment for me. It’s possible to switch over and do something different that you may not have much experience doing.

Felix: During the recording we would just start with an idea, inspired by whatever we were listening to. We just let it happen because it seems everyone tries to exercise so much control over something they essentially have no control over, for instance, whether the listener will like you or not. So why don’t we make decisions based on what we do know, what we like. Another thing we kept saying was “What are people doing now? Well let’s just do the opposite.” That was the easiest decision. Even the Eno cards [Oblique Strategies] were a hassle.

ONLY: When was that first collaboration?

ONLY: And how many live shows?

Felix: Just the two so far.

ONLY: Since you had a fully recorded and manufactured album before you played a show, do you see Culte Du Cargo as more of a studio band?

Felix: Not right now. There is no recording going on and we’re strictly performers.

ONLY: Because most bands will write songs, play live, and then record.

Felix: I don’t think there was any reason for us to get on stage and fumble around. You know, you’re charging five dollars and you really don’t want to rip anyone off.