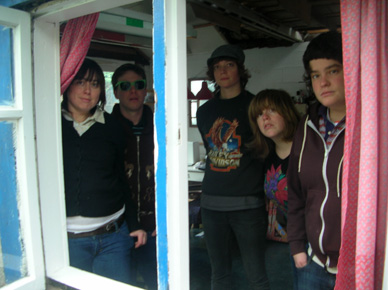 We Do Do Them

Delirious from the anticipation of their cross-Canada tour, I chatted with Mandy, Eli, Jeremy and Chloe (drummer Laura was visiting family on the island) of hot pop group Better Friends than Lovers in Mandy’s backyard over beer and chocolate cigarettes provided by the lovely promoter Melissa Jordan.

ONLY: There is something weird about having chocolate cigarettes. They really bothered me when I was younger.

Eli: They’re really horrible, but I like the packaging.

ONLY: Have you had a tour this long before?

M: No. The first one we did, we went to Calgary and back in ten days.

ONLY: This one is a little longer.

ONLY: Do you know what you got yourself into? (laughter) Is the Van OK? Tires? Oil Change? Tail pipe’s not going to fall off?

E: We might get tires in Alberta because they’re cheaper. We got to get chains too. It’s -8c in the Praries right now. Everyone’s freaking out about their crops.

ONLY: Who cares about Farmer Dan. As long as the roads are OK. You guys got to get to Lethbridge.

M: I care about Farmer Dan.

ONLY: Are you going to ask for floors to sleep on at the end of the shows?

M: I think we got it pretty worked out. There’s not too many places where we don’t have a place to stay. I’m from the Kootenays. Jeremy’s from Winnipeg. You’re [Eli] from the Okanagen. Laura’s from the Maritimes, and then we have friends that are living in Montreal and Toronto. We’re doing the first leg of the tour with People Verses. They’ve hooked us up with places to stay as well.

M: I just spent the last hour and a half ‘MapQuesting’ out all of our destinations and I basically shat my pants. Because we are going past Toronto to Montreal.

ONLY: Are you kidding?! You’re going to die!? (laughter) How far are you going?

ONLY: Congratulations! Are you playing Pop Montreal?

M: We didn’t make it in. We had a hard time booking a show in Montreal because of the Pop festival. We had a show but we got booted because a bigger band was playing: the UK Subs. We finally got a show with the Normal Humans, which is Will Austin’s……

ONLY: No way! That guy is awesome. He can get a gig in a telephone booth. (laughter)

M: We’re playing in a new space that doesn’t even have a name yet.

ONLY: Yeah, it’s called Will Austin’s house. (laughter) Have you guys ever been together for six weeks?

ONLY: Do you have enough things in common?

M: I think that we do, and I think that’s what’s allowed to be cohesive in a group for so long.

ONLY: Might I suggest a sport that you invent?

M: Well, we got a few tricks up our sleeve, like Unicorn on the Cob.

ONLY: Unicorn on the cob pipe uhhhh… bomb?

ONLY: Congratulations on getting signed to Global Symphonic.

M: Yes! Sean Keane is an awesome guy. He is one of the two guys that runs the label. He has been super generous and easy to work with. He just approached us. There was a bit of a buzz going on (about the band) and he said “we’d like to sign you.” We didn’t sign any papers and it wasn’t formal. It worked out great. He’s enabled us to make a great album, and he’s been a go to guy ever since.

ONLY: Has it always been the five of you?

E: Yes, except we’ve been through a couple of drummers. It started with me and Mandy being best friends, and we started to jam. Then Melissa booked us a show, and over the years it developed into this.

Melissa: Their first show was at the Railway Club, and they were called Heavy Pet Shop. I made fun of you guys on stage. (laughter everywhere) It’s not Pet Shop Boys and it’s not Heavy Petting…

ONLY: Hey, it’s their grave! (laughing and merriment)

BFTL play their CD release party at the Media Club on Wednesday, September 19th with the People Verses and Big Whoop