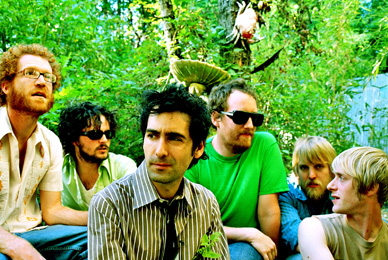 Holy shit are Blitzen Trapper ever addictive. When I discovered their new album, Wild Mountain Nation, a few months ago, I made everyone I know listen to it immediately. It’s one of those infectious albums that has just enough of everything to make each repeated listening seem new. All the songs sound really different, yet the album is fluid, coherent, and despite everyone else’s constant other-band-comparing, totally unique. Although Blitzen Trapper are a sextet, band leader Eric Earley wrote, performed and recorded every song on the album entirely on his own.

ONLY: I got one of my friends from high school to listen to Wild Mountain Nation recently, and he sent me a text message, and I’ll just read it to you, hold on a sec. He said “I hear Deerhoof, Guns n’ Roses, Neil Young, the Beatles, the Band, Gorillaz, Lynard Skynard and southern hipster metal in Blitzen Trapper.”

E: Well, I don’t really buy records at all. I listen to music, but just not a lot. I’m not like a huge “fan.” I don’t follow bands or really get into bands. I’ll get into songs or I’ll get into records that I’ll find something good about. But I’ll also listen to really bad music just to glean stuff from it.

E: I don’t really like it — I listen to a lot of dub as well, and afro-beats. All my production techniques I use for recording I steal from Lee ‘Scratch’ Perry and King Tubby.

E: Well, I guess if you were one you’d probably know. Just a kid who was a nerd who was into science fiction novels, and into thinking about the ideal utopian future, but also maybe is into math, which is how I was when I was younger.

E: Oh yeah, I studied physics and math in college, and when I was in high school all I did was read science fiction.

ONLY: Nice. So it’s a song about you.

E: Yeah. It’s a song about me and everyone who’s like me.

ONLY: Do you think it’s weird that “Sci-Fi Kid” has been remixed so much?

ONLY: It just seems like it’s the opposite of what would lend itself to an electronic song, but all the ones I’ve heard have worked phenomenally.

E: Yeah, some of them are pretty good actually. There was one that got done, and they did a mash-up of “Sci-Fi Kid” with…. what’s that chick rapper’s name from the ’80s?

E: Yeah the Roxy Shante. When they put her rapping over the top of it, that was my favorite. (You can listen to it here)

E: Well, that one just happened, but it’s also a mash-up so it’s not like you can sell it or put it on a record anything. There have also been a bunch of other ones, but that’s definitely my favorite.