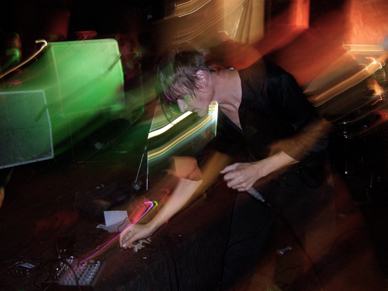 Last Friday Fake Shark Real Zombie, White Lung, Cheerleader Camp and Canaries played at the Cobalt. Suspiria was a no-show due to some internal band restructuring. This was a classic Cobalt mosh-party. The fries at the cafe next door are both convenient and delicious. And there are nice clean tables and chairs there to give you a break from standing all night to avoid contracting hep C or cooties from the various surfaces of the Cobalt.

The Victory Square Block Party was a total blast despite wetness from above and below. No Gold was slightly tardy, but sounded brilliant in the warm afternoon air. Sun Arise was ready for fall in a wool coat and White Lung scared everyone’s parents. Choir Practice matched really nicely. Modern Creatures managed to fill a big park with sound. Chet were cute and Secret Mommy Quintet was strange as the sun went down. Frog Eyes had the most hilarious banter ever to hit that grass. We should all get together and hang out in a park more often.

The afterparty at Pub 340 was also a blast. Terror Bird, Twin Crystals (Jeremiah played 3-sets in one day, and he says it’s not the first time), Joey Casio and Mutators played. Between the Block Party and the afterparty we raised over $1000 for the Downtown Eastside Women’s Centre. Giant hugs for everyone involved!

Tonight at the Pit Pub Girl Talk, the Blow and Thunderheist play a super exclusive student-only party. Whatever. I’m sure the rest of us can find obnoxiously manic mashups, long-winded nonsense love stories and booty bass with repetitive, meaningless lyrics somewhere else.

That fancy magazine Pyramid Power is busting out their third issue. The release party is at the Met tonight. It’s ten bucks to get in, but you get a free copy of the mag. Bring a big purse to keep it safe.

On Friday Blank-its from Seattle play with Ladies Night and Vapid at Pat’s Pub. Blank-its play their instruments with 60-grit sand paper and have an alien robot that speaks cat language for a singer. Don’t forget to bring some pennies so you can stick them to the wall with the power of your mind.

Also that night: Bobby Conn and Canned Hamm at the Media Club and/or Ghost House, Foster Kare, Winning and Life Against Death at the 340.

Much to the other guy‘s chagrin, olden days punks Sham 69 play at the The Balmoral on Saturday. It’s funny that they can get away with stuff like this because they’re English. That’s just what English people do.

On Sunday The Fucking Champs play at the Plaza Club with the glamtastically rockdiculous Birds of Avalon and local metal gods Bison.