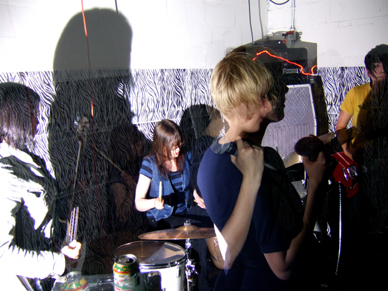 We All Love Chips

White Lung don’t like it when the media puts too much emphasis on the fact that they are all girls. That’s why they are working on building their reputation as a bunch of divas and making their boyfriends carry their gear.

ONLY: What kind of music do you play?
Mish: Ghettotech. I don’t know. You answer the question.
Anne-Marie: Punk.
M: We play what Natasha tells us to.
ONLY: Really?
M: No.
ONLY: What’s Natasha’s role in the band?
AM: She just doesn’t talk.
ONLY: Is she submissive or dominant?
M: She’s submissive, but she’s so talented that we let her dominate when she’s in the mood. She makes these fucking riffs that are just like “rlrlrlrlr” and you’re like “Wow, you just wrote a hit song in 20 seconds and we were just waiting for Grady to plug her bass in. Every practice for the last month we’re waiting for Grady to set up, and she’s like “Where are my chips? Where’s my strap? Where’s my purse?” And then we’ve written a whole song.
ONLY: Chips?
M: Yeah she’ll have a bag of chips.
AM: And she’ll be like “What was that song?” and we’re like “I don’t know, we were just warming up while we wait for you.”
ONLY: She eats chips while you practice?
M: She enjoys a Dorito from time to time.
AM: We all love chips.
M: We all love chips.
ONLY: Is Natasha still happy just playing guitar even though she’s Sally-frontperson in Suspira now?
M: She is. I’ve been trying to get everyone to sing back-ups but they’re all like “No! No!” Even though you sing in Riff Randels.
AM: I know, I would do it, but everyone else says no, so I just do it to bug you. I just do it to be difficult.
M: Yeah, I know your style. But Grady has a really nice voice and I want her to do it. I think Natasha’s pretty…
ONLY: You think she’s pretty?
M: Yeah, she’s pretty.
AM: She’s very pretty.
M: I think she’s pretty happy being a guitar goddess.
ONLY: What’s with you guys being such big divas?
M: Uh, I’d like to clear up this whole diva thing.
AM: Whatever, I think we should just embrace it. We’re divas. Have we ever brought gear to a show? No. Chances are we’ve borrowed your gear.
M: Yeah, and we’re not sorry.
AM: Grady shows up right before we play.
M: Why do you think we’re both dating people from Bison?
AM: So that we can use their gear. And get them to carry our shit.
ONLY: When does your record come out?
M: It’s going to be ready for the Block Party.
AM: Hopefully… We recorded it in a garage. One take. We couldn’t hear each other. It was an actual dirty garage.
M: There were jerseys taped up on the wall.
AM: And then that ‘roid raging dude came in.
M: Oh yeah, this crazy dude, at 10 pm was banging on the door–
AM: Expecting it to be dudes. And then he saw us and stopped. And he’s yelling at Adam, who was recording us, while we’re all the ones with instruments…
M: And then after he left Adam was like “He was all ‘You know, dude, your back-up dancers are cool, but you’re making way too much noise’”

White Lung plays at the Cobalt Friday, August 31 and at the Victory Square Block Party on Monday, September 3