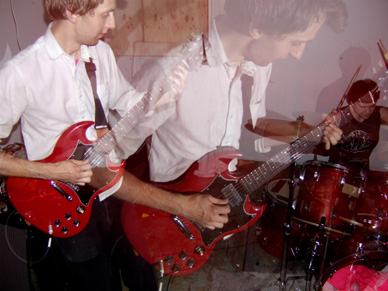 BALL WITH A CUP FOR A HAT

Gay Beast thrilled a slightly wonky audience of misfits that (despite it being difficult to find the beer at the Secret Space) seemed remarkably drunk. The merch table was super crafty and all the hand-deco goodies were cheap. Even the ball with a cup for a hat had a good time.

There’s a new DJ night at the Balmoral on Tuesdays called Kitchen Sink. The Balmoral is gigantic, old, beautiful on the inside and full of cheap booze. But it’s really fucking hard to get people into. Maybe it’s because when you sneak out back to smoke a joint you have to hang out with a dude shooting heroin into a giant scar in a girl’s neck.

Last Night Cave Singers and Lightening Dust pulled the time machine into Pat’s Pub for a very well attended night of psychedelic folk. The bar staff commented that if you couldn’t see the stage during the Cave Singers’ set, you’d have thought that dude was Stevie Nicks.

The Makeout had an end of summer party at the Royal Unicorn last night. They may as well have just called it the back to school party. Grad ’08, woo hoo!

Defektors play at the Pub 340 tonight with space-surf garage rockers James T Kirks. Smells like Edmonton. Lizard People will play too. Good thing they found a way to get through the Earth’s atmosphere on their motorcycles.

White Lung plays their second-to-last show (before the one with the big mouth goes to Holland) at the Cobalt on Friday. Maybe their new 7” will be ready. Fake Shark Real Zombie, Cheerleader Camp, Suspiria and Canaries are playing too.

On Saturday, there’s a fundraiser dance party for the Helen Pitt Gallery at the old Sam the Record Man on Seymour and Dunsmuir of all places. What the hell has that place been doing just sitting there with a big “S” for a door handle all these years? It’s about time something happened there.

Also that night: Devandra Banhart plays at the Commodore and You Say Party! We Say Die! play at the Malkin Bowl with K-Os. Check out the YSP interview on the prestigious 24 Video Podcast. The dude goes ahead and (very awkwardly) throws around phrases like “dance-punk,” “sub-genre,” and “Squire Barnes.”

And don’t forget the afterparty at Pub 340 with Twin Crystals, Terror Bird, Joey Casio and (fresh from a big ass tour) Mutators. Both of these events are benefiting the Downtown East Side Women’s Centre.

Greenbelt Collective is having a tour kickoff party at the Royal Unicorn next Tuesday. It will be appropriately crafty with a clothing swap and a bake sale. It starts at 7, so get there early if you want the goods.