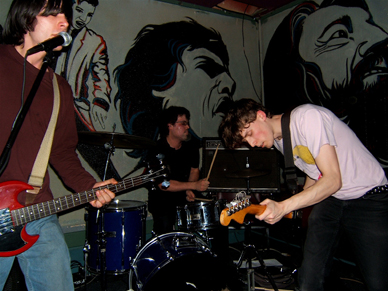 A NEW TYPE OF BROTHER

I went to meet Ben (vocals and guitar), Jeremiah (vocals and bass) and Evan (drums) at their jam space, the Emergency Room. I like these guys; they are all rad boys who make good music that reminds you of a time when everything was raw and chaotic. Plus, they gave me change to take the bus home.

ONLY: So, Jeremiah you are in like four bands. How do you balance that all out?

Jeremiah: When it comes to being in a bunch of bands what the key is…keep it in the closet [Ben laughs], swivel the family and punish the deprived.

ONLY: It’s kind of like hiding the fact that you’re gay?

J: It’s basically running in the world of denial.

ONLY: Your new recordings are great. Are you going to tour?

J: Well, I think we’re going to go play on a cruise liner next April.

ONLY: How did that happen?

J: Well, Ben got his hair cut and all these new ideas. We’ve been learning a lot of Nickelback songs.

Ben: I don’t think you need to tour, just because you’re not playing in other places it does not mean your wallowing in obscurity. I think there is quite a lively scene here and a good community of bands.

ONLY: Do you guys ever get bored of each other?

Evan: No, these guys are a barrel of laughs.

J: It was great when Ben and I worked construction together. That’s how we came up with the idea for this band. We started talking about creating the greatest rock n’ roll band of all time, with Evan on drums.

J: Yeah, well when Ben and I worked construction together we learned that there is this red neck work code where they ask you, “Are you guy’s brothers?” Which actually means, “Are you faggots?” So, we were just like, “uh…yeah?” because we didn’t know. Then, they made fun of us because I had long hair and Ben is just too hot to be on a construction site.

ONLY: So, that’s how Ben got so huge.

J: Yeah. One time we were working with all these young dudes, who were totally homophobic, in a tower downtown so you could look around in everyone’s windows outside and see them naked and having sex.

B: People like to have sex in front of windows.

E: Why else would you buy a condo?

J: One day there is this big group of yahoos by the window, and they are all looking at something and called us over to check it out. And you couldn’t really see what was going on; just someone’s ass and someone else really hammering them. And all the construction dudes were like, “Oh yeah, check that shit out” and the people fucking stand up and its two dudes. They were all freaking out because they had huge hard-on’s and Ben and I just laughed. They all just wanted to go downstairs and puke.

ONLY: Did your construction co-workers ever come to any of your shows?

J: No, that’s one thing you can never admit too, because they’ll just be like, “You guys cover any Hendrix?” and then start talking about their buddy’s band in Ontario. But usually when someone does that I just spit on them and slit their throat.