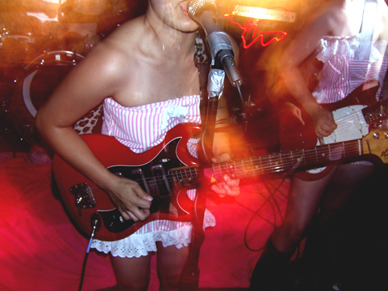 TITS, Shearing Pinx and Defektors were a super fun party at the Emergency Room on Friday. Those ladies from San Francisco were the loudest candystripers I’ve ever seen. It looks great on paper, sounds alright on their records, but it’s a virtual serrated face slashing when you watch it live.

Terrible Twos and Frustrations made for a real nice Tuesday at Pub 340. It was especially nice because Burnside was buying everyone drinks and whispering sweet nothings like crazy. That “most amazing creature alive” bit might have worked if I didn’t watch him say the exact same thing in Robert Dayton‘s ear.
Terrible Twos were a sort of pop-punk science-fiction carnival and Frustrations played the kind of quirky, elaborate grunge that you just want to cuddle up to.

The party people are all in a titty about Tizzworth at the Bourbon tonight. I mean all in a tizzy about Tittsworth.

The resurrected Casbah! (Fridays at Library Square) managed to host Hepatidal Wave without an instant shutdown by the broad-chested and fake-breasted bartenders and regulars last week. So they shouldn’t have too much trouble with Cheerleader Camp, Modern Creatures and Nu Sensae this week.

Deep Lez Film Craft: The Bittersweet Films of Freeshow Seymour shows at the Cinematheque that night as part of the Vancouver Queer Film Festival and there’ll be an afterparty at Lick with live performances by Freeshow Seymour and Her Jazz Noise Collective.

In celebration of an upcoming retrospective album called There’s no Dee Dee, the Dishrags will be playing at Richards on Richards this Saturday with the Furies, Duvallstar, The Bug Nasties and Search Parties. The ‘Rags must have been the cutest ever 15-year-old girl group/punk band when they started in ’77. Their song Past is Past makes me shutter with its brilliant simplicity.

Also that night: Pure Country Gold bring their bloody-raw blues rock from Portland to the 340 for a show with locals Thee Manipulators and Master Apes.