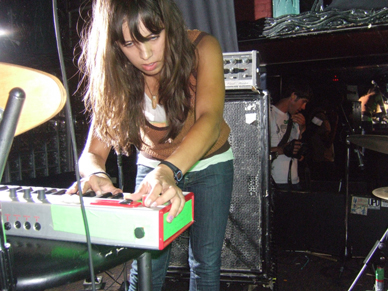 A MILLION BILLION THINGS
Times New Viking lit up the Pub 340 with their tight, scratchy noise pop. The show suffered from the classic 340 double booking syndrome though, so the show started earlier than usual and I missed Little Claw and Shearing Pinx.

There are a million billion things happening on Friday, so choose wisely or bike around as fast as you can. Ready? OK: Cheerleader Camp, White Lung, Jakartah and Bloggers play at Pat’s Pub. The Jolts, the Lizard People, the Pervs and Motorama play at the Cobalt. Baboon Torture Division, Interior Design, Kids Get Hit By Buses and Shavondra Brickhouse play at Hoko’s. Barcelona Chair, Aerosol Constellations and Japandroids play at La Casa Del Artista.

And if that giant blob of local loudness isn’t enough for you, TITS from San Francisco are playing with classic grunge punks the Defektors and the sprawlingly noisy Shearing Pinx at the Emergency Room. This is my personal pick for this Friday and I swear it’s not just because I’m putting it on. I’m only putting it on because it’s going to be awesome. And besides, it’ll go late, so you can come after whatever else you go to.
TITS plays metal hymns and Kim West from “Crack: WAR“ and Death Sentence: Panda plays guitar and sings/chants.

Defektors also play on Saturday with Treacherous Machete at Pub 340.

One of the Lamplighter‘s last shows will be on Sunday with Sex Attack, Sex Party, Barbison School Painters and the Ludvico Treatment. Sex Party is from Red Deer and that’s pretty cute.

And if you feel like making that arduous but beautiful journey to North Van, Black Mountain is playing at Under the Volcano and there’ll be some interesting and informative workshops.

And finally, on Tuesday, Terrible Twos, Frustrations (Detroit), and Modern Creatures play at the Pub 340.