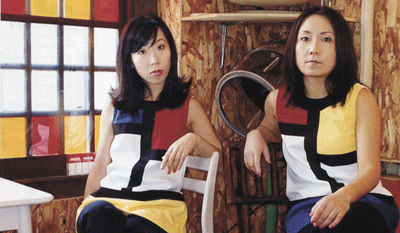 I just got off the phone with Shonen Knife’s Noako Yamano when it hit me: I forgot to ask her a question I’ve been wanting to know for years. It is a really stupid question. I wanted to know if the band ever had problems with customs and going across US/Canada borders. The horror stories you hear from other bands couldn’t possibly happen to the world’s most adorable band. What is the bloody world coming to when you’re stopping a trio of sweet Japanese musicians on grounds of being potential terrorist threats? I know. Stupid.

ONLY: When was the last time you played in Vancouver?
Naoko: About Vancouver, I remember playing in 1998.
ONLY: Really, because I thought the last time was at Lollapalooza in 1994. I thought you were so sick of this town that you didn’t want to come again.
N: No, no. There was no reason. I like Vancouver a lot. We could not do a very long tour. We always started from the East Coast or in San Francisco. The route was a little bit out of the way…
ONLY: Is this the most extensive tour you have done in a while?
N: Yes. We are doing 29 shows. The same as in 1994.
ONLY: Why do you feel the hunger to go back on the road?
N: Because there is a promoter in New York that likes Shonen Knife, his name is Brian. He made a phone call to me directly three years ago to start a North American tour again.
ONLY: You’ve been putting it off for a while?
N: In the end of 1999, Michie left the band. She got tired of music and went to do something different. She is spending a regular life and she had no contact to us for a long time. But I’ve heard that she’s doing well. Since then my sister Atsuko switched to the bass and we used to play with a female called Mana, who’s also drums in DMBQ. She left and now we play with Atiko. Her drumming has a good groove.
ONLY: When did you first come to North America?
N: We played one show in Los Angeles in 1989. At that time we had records released on a small American label, and the label guy invited us to play one show. We took a summertime holiday and went down to Los Angeles. At that time many band people like Redd Kross and Sonic Youth were in to us.
ONLY: When you played Lollapalooza, you took a picture of yourselves with the crowd in the background. I was wondering if you have always done that, I wonder if you still do that, and I’d like to know what you’ve done with the pictures.
N: Actually, I always wanted to take a photo with our audience, but I don’t think it’s very professional.
ONLY: I think it’s wonderful! Do you have a collection of all the photos?
N: No, no. We’ve only done that a few times.
ONLY: I feel so special.
N: Yes, it’s very special. I wanted to do it every time, but I don’t want to bother the audience.
ONLY: It’s no bother at all. I was on the website of a fanatic Shonen Knife lover who asked you about the over produced pop music that is prominent in Japan. Do they have a version of American Idol in Japan, where young up and comers sing standard pop songs and get berated by judges?
N:(Silence)
ONLY: Have you ever heard of American Idol?
N: No.
ONLY: It’s a really popular show in the States.
N: Oh. A long time ago, when I was a child, we had such programs like that. We don’t have that anymore.
ONLY: I heard you’re going to be releasing new stuff.
N: We are going to release a new album in June in Japan. We don’t have a North American deal so far.
ONLY: I can’t wait to hear it.
N: I’d like to release new material as long as I can. My love for music is the same as it’s always been. My mind is very fresh.
ONLY: I hope you keep making records when you are 100 years old. I’d like to hear that album.
N: (laughs)