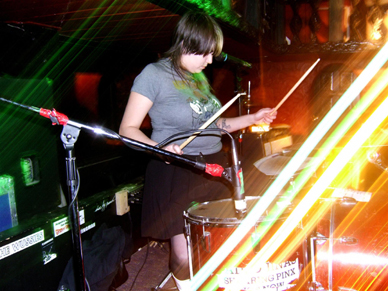 No Feeling are playing their last show this week, and after a solid lifespan spent opening for every good garage band that played in Vancouver, they’re going their own ways. Except that two thirds of them live together and are practically married (where’s that ring, Levon?). And they’re all total best friends forever. So i guess they’re not really going anywhere. Levon’s John Waters moustache is gone, but the tan line remains, and when I started asking too many question about their privates, he had to leave for his other band’s practice.

ONLY: Why aren’t you going to be a band anymore?

Levon: Because I’m too busy.

Becca: He’s got cooler shit to do. He quit the band. We moved in together, so we don’t really need to be in a band together. And he’s busy. He started Master Apes.

L: And I felt like an asshole singing in two bands.

ONLY: How did you choose? Why did No Feeling get the brush off?

L: Ladies Night’s always been my number one. It’s my baby.

ONLY: How is Ladies Night?

L: Good. Better then ever.

ONLY: Are you touring or anything?

L: No. We were supposed to tour this summer but it got cancelled.

L: Quitting band members, us being broke as hell… that’s pretty much it.

ONLY: Why did Clint quit?

B: Because he wants to “make it” with the Yesterdais. In more ways than one… I think he thinks he’ll get laid more by being in that band.

ONLY: Really? Because I feel no attraction to that band. Clint doesn’t really fit in. He doesn’t look right in a suit.

ONLY: It’s totally the neck tattoo. What about you ladies, are you busy with other bands too?

M: We have something new on the horizon.

B: We have a new band that we’re making up called the Bad News Babysitters. It’s me and Megan as the same rhythm section and Marissa (Megan’s sister) on guitar.

ONLY: So you pretty much just replaced Levon. It’s nice of you to do the courtesy name change.

M: Yeah, sorry Levon, we’re keeping all of your songs.

ONLY: How long were you a band for? Was it a good run?

L: We played a lot of fun shows.

B: I think our basic motivation for starting the band was so that we could all three go on trips together.

ONLY: Did you go on tour?

L: No. We didn’t go on any trips together. We went on trips to the bar… We played a bunch of shows and put out a record, so that’s good enough.

ONLY: What was the high point of No Feeling?

M: For me it was learning to play the bass guitar.

L: The high point for me is this Thursday because I get to play with three of my favourite bands… and playing in the park.

B: For me it was getting to play with the Spits

ONLY: Is it hard to play drums with such big boobs?

L: The question everyone has wanted to know.

B: No, that’s totally valid. I don’t think it is. It’s not as hard as running.

B: You just get used to it. You learn to live life with big boobs.

No Feeling plays their last show at Pub 340 Thursday, July 26 with the Lamps, Haunted George and Cheap Time