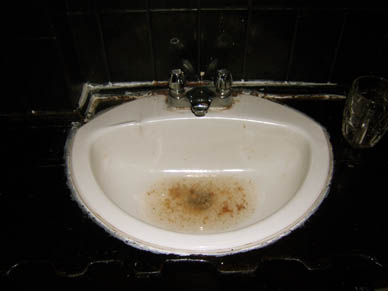 Pub 340 aka Ultrahumid Sweatpit was at max capacity with crust punks and metalheads for Bison on Friday. Everyone there was wasted and stoked, but I just wasn’t in the mood for steam bath made of other people’s moisture. Luckily the Royal Unicorn was pleasantly air conditioned and a little more laid back. Sun Arise played a nice set of catchy classic rock and totally meant it. Jen was like Lou Reed playing the lead in the Wizard of Oz. Good vibes all-around. All that drink-sharing kind of explains the mass outbreak of that vicious cold that’s going around right now.

Sun Arise plays at Pat’s next Wednesday with Maple Falls.

On Sunday the 340 was much more temperate but unfortunately under populated. Poor $2 out the Door played an enthusiastic set to a handful of kids. I missed Petroleum Byproducts but did appreciate the fact that they’re serious enough about what they’re doing to wear leather pants in that heat.

White Lung were totally inappropriate for the indie show that they played at the Lamplighter on Monday. And it was just too early in the week for Incite‘s German electronic industrial at the 340.

A new indie night called Finally! happens at the Lamplighter on the third Tuesday of each month. They had the brilliant idea to quarter the bar off with curtains to get rid of that giant empty feeling. Another idea would be to book a smaller venue.

Tonight means Thunderheist at the Makeout and the Indie Music Video Festival at the Railway Club. Videos are at nine and Canned Hamm‘s Christmas in July will follow at 11.

Coconut Coolouts are a bunch of stand up guys. By that I mean they all stand up: two standing drummers, a standing keyboard player and even a sandingbanana . I’ll forgive them the fact that they’re from Seattle, but only because they have a song called “Pizza Regret,” which is a type of regret that I know a lot about. And because they’ve got a 7” coming out on the Vancouver label Seeing Eye Records. Master Apes and garage swamp monster cult leaders Lizard People will join them at Pat’s on Saturday.

And just down the street that night is the Mutators’ tour fundraiser at the Emergency Room with Vapid, Modern Creatures and new art by Keith Jones, Mark Bell andMutator Justin Gradine.

Robert Dayton‘s new band Hallmark has so many layers of meaning. They play at the ER on Sunday with 99 and White Lung.