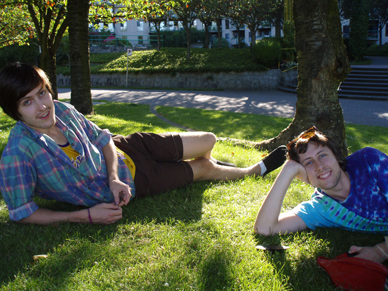 I met up with Liam and Jack from No Gold on one of the first warm days of summer. Judging by their Miami-fresh wears and the day’s heat, I asked them if they had just come from the beach. Turns out they hadn’t, that’s just how they always look. No Gold’s music is like Tropicalia meets 77-era Talking Heads. Sounds like a new movement along like lines of Hyphy or Nu-rave to me. They have their style and their sound, now all that’s left is the hype. So let’s get started.

ONLY: So you changed your name from Yukon to No Gold, what happened?

ONLY: But that was only three years ago.

L: [Laughing] Yeah, well three years is a long time. No Gold is like if someone came up to you and was like, “Hey man, you got any secret treasures?” You would be like, “No Gold, man. No Gold.” We were just tired of the old name and there are a strange amount of bands with it too.

Jack: We did get a nasty Myspace message about it.

ONLY: Really? What did it say?

L: They were like, “You do know there is already another band called Yukon, don’t you? We were here first.”

ONLY: What did they base that on?

J: [Laughing] When their Myspace account was created, I guess. If they want it they can have it.

ONLY: Were there other potential names?

J: I still like Cool Runnings. The problem with getting a new band name is that it’s like getting a new haircut. Everyone comes up to you like, “Oh, you got a new haircut, eh?” And you have to be like, “Sure did, what do you think about that?”

L: I never notice Jack’s haircuts. He does drastic ones too. I guess I’m a bad friend.

ONLY: Well if no one makes a comment about your new name does that mean that you don’t have any fans?

L: I’m not under any pretensions that we have any fans. All I know is that all our Myspace friends are from me adding people like R. Kelly and Rhianna.

ONLY: What did you think of Trapped in the Closet?

L: So good. You have to see the DVD with the commentary on! It’s R. Kelly in a black room, sitting on a couch smoking a cigar and he occasionally turns around and talks to you.

L: It’s so amazing because his commentary makes no fucking sense. He keeps referring to things with the wrong literary terminology and sometimes he’ll just say the same thing they are saying in the song. It’s so good. I’m just waiting for him to clear his court case so he can make more episodes. Have you heard his new album yet?

L: It’s kind of all over the place. He’s really into one metaphor for a whole song. You know how “Ignition” was about sex using a car metaphor? He has a song called “The Zoo” which is about having sex but in the animal kingdom.

ONLY: That sounds like a whole new set of legal problems.

ONLY: What about that tour you just went on?