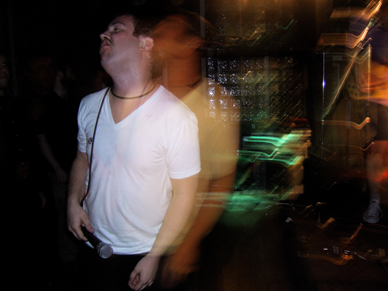 Hoko’s is the best karaoke place because you never have to wait very long to sing. Especially on a Wednesday, and since it’s only a few blocks from the Royal Unicorn, you’re pretty much set for a mid-week song and dance. Tonight the Make Out suggests short shorts, but I’d say just go for straight-up underwear if it’s still this fucking hot out.

Ladies Night played at Pub 340 on Thursday and sang songs that were, from what I could tell, about the “wedding comedy” being a sneaky new genre of film. Their performance was brilliantly shitty. They’re constantly yelling at each other on stage and I can really get into that.

Last Friday 1/2 Alive nestled into its new home at Richard’s on Richards. This is the second big step in the gentrification of club nights before the Olympics. I mean, the athletes are going to need somewhere hip to party, right? The first step was closing down Prime Time Chicken before I got a chance to start my awesome night Junkie Fried in the pub there.

So this new 1/2 Alive is $10 to get in, and they won’t give you a glass of water, only a bottle for $3.50. And if you go outside for a smoke, they won’t let you back in with your empty bottle in case you were planning on filling it with tap water. “If you can’t afford to buy another bottle, you shouldn’t be here,” the bouncer told us. He was right.

The special guests Numero only made things worse. But at least their set meant a break from MC Cliche who yelled meaningless hip-hop catch phrases in rapid succession.

Anyways, speaking of wedding comedies, our film dude, Adam O. Thomas got married on Saturday and it was the best party of the year. But it did mean I had to miss the Gaff Gallery show and the afterparty at the Emergency Room. Defektors, Nymphets, and White Owl played and it ended in a mass influx of short shorts and high heels and a giant back alley brawl.

The Parallels play at Pat’s this Friday, the 13th, with Rock’n. My guess is that Rock’n will be rock’n, rock’n tonight, rock’n forever, rock’n again and rock’n already.

On Saturday the Sweatshop (1820 Pandora Street, in the back alley) hosts a crazy all-night party. Wear pajamas to get in cheap and stick around until six am for free pancakes! Free pancakes? Yes, free pancakes! [Update: for some reason this night has been canceled in favour of a show with Bend Sinister, The Clips, Treacherous Machete and a Fake Shark Real Zombie DJ set. So no, there are no free pancakes. – Ed]

Sex Negatives, Twin Crystals, Modern Creatures, the Petroleum Byproducts and more will be playing. If you get in the bathroom line as soon as you get there, you’ll probably have relieved yourself just in time for breakfast. Seriously children, find a better hidey place to do your blow.

I’ve got big expectations for the Petroleum Byproducts. If you miss them Saturday you can see them Sunday at the 340 with Nu Sensae, White Owl and San Francisco’s $2 out the Door who have bass, drums and Suicide-y (not suicidal) vocals.