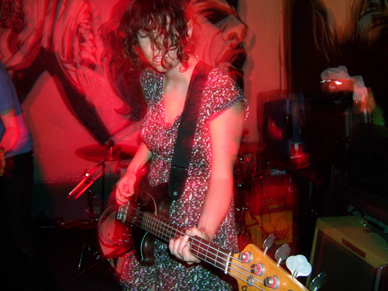 PUT ME DOWN FOR SOME ONION RINGS

They Shoot Horses played their first Vancouver show in ages at the Railway on Friday and it was as mega fun and enthusiastic as ever. That long-haired kid that dances like crazy at the front of all the shows was there, but the place was strangely devoid of banging on random stuff. Maybe I missed that part because I was too busy getting ripped off by a cab driver.

I didn’t quite make it to Pat’s in time for Yukon that night. But since then they have changed their name to No Gold. It seems there are a lot of other bands called Yukon, surprisingly including a lot of hip-hop artists. My personal favourite: Yukon Black. It’s funny because it’s like that liquor, Yukon Jack, but it’s “Black” just like he’s black.

After I blissfully discovered that Peach Schnapps is mistakenly priced as $4.50 for a double in the Pat’s computer, Montag played synthesizers and percuss-y things (both acoustic and electronic) and sang poppy, lovey songs in different languages. Miracle Fortress (from Montreal) played bright, sunshiny experimental pop. Overall, the show was nice, but kind of boring. Like hanging out in a spring meadow: it’s really bright and pretty, but you don’t have your phone or anything to do and you’re kind of stuck there.

Battles play at Richard’s tonight… No, not that Battles... Oh that’s the one you were thinking of? Battles from New York, not The Battles from here… You know? Speaking of name changes… Anyways, It’s probably expensive, and as interesting as their new album Mirrored sounded for about half a song, it eventually just blends into a really long version of the Chipmunks’ Christmas.

On Thursday Defektors, Cheerleader Camp, Ladies Night and the Bloggers play a classic Vancouver 2007 bill at the Pub 340. I’m not sure if the 340’s Taco Hole is open on Thursdays, but if it is, put me down for some onion rings.

Also that night: Primes play at the second-to-last Wanted in the Lotus basement.

Saturday means an awesome opening at the Gaff Gallery with Michael Comeau‘s art and performances by two San Francisco bands, Cryptacize and The Breezy Days Band. Cryptacize features Chris Cohen (of the Curtains and formerly of Deerhoof) and the lovely Nedelle Torrisi. And then there’s an afterparty at the Emergency Room.