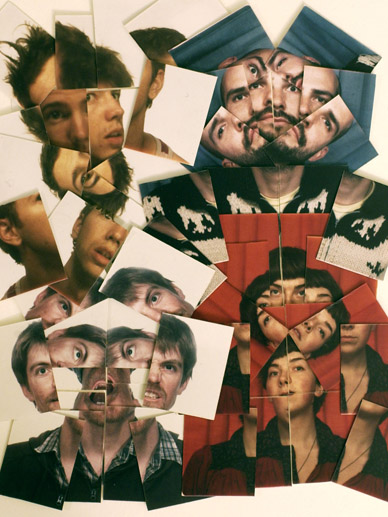 According to their online biography, the members of Shapes and Sizes are strict cataloguers who live and breathe by routine. According to their latest album, Split Lips, Winning Hips, A Shiner (released last month on Asthmatic Kitty), they’re frenetic musicians whose art-pop is as sloppy as it is epic. According to bassist and vocalist Nathan Gage, however, they’re just four regular Canadians: they use Wikipedia and they’re skeptical about the Montreal music scene. Nathan spoke to us before a sound check in Pittsburgh.

ONLY: I’ll start with some technical stuff. Do you call your band ‘Shapes + Sizes’ with a plus sign in the middle, or is it just ‘Shapes and Sizes’?

ONLY: I ask that because the ‘About’ section on your website is all about classification and order. So I wanted to make sure everything was cool with you in how I spelled it.

N: Oh no. We’re not really that uptight. [laughs]

ONLY: Did you all write that bio?

ONLY: Is the bio mostly exaggeration, then, or is it somewhat true?

N: I don’t know . . . yeah. No. [laughs] That’s pretty pure exaggeration. It really is just made up for the sake of making something up. I don’t think we’re especially big on categorizing things.

ONLY: Oh. I was going to have you take something that’s maybe mis-categorised, like tomato as a vegetable or fruit, and fix it . . .

N: Sure, go ahead. So you name something and I say what’s wrong with it?

ONLY: Actually, I was going to ask you if there were things in the world you could set the score straight on, or that you wish you could move to some other category.

N: There are a lot of places I wish I could move to Canada. I don’t know if that counts.

N: Right now we’re in Pittsburgh, and it’s pretty beautiful. Sometimes I wish I could move to Pittsburgh, but I’m in Canada.

ONLY: So the beautiful things should be all Canadian?

N: Yeah. They should all be near me. [laughs] And all those things I don’t like should be away from me.

ONLY: What would those be?

N: Highway food. And, I guess, highways generally. If you could take all the cities and then get rid of the distance between them, that would be pretty great.

ONLY: So then we would be neighborhoods in one big city.

N: Right. One huge mega-city, and leave the rest as country.

ONLY: Your band is from Victoria, then moved to Vancouver, but is now technically based in Montreal.

N: It’s very ‘technical’ at this point. We were thinking we would be more permanently in Vancouver, but stuff happens. There were some personal reasons why one of us wanted to go to Montreal, and we’re pretty committed as a band. It’s much easier to tour from Montreal. . . We also do really love Montreal, it’s a very beautiful city. But it has a lot of problems. As far as being an anglophone in Montreal, it’s hard to get a job. Only one of us has successfully done that so far.

ONLY: One more technical question: When I introduce your band in this article, should I say, ‘Montreal band Shapes and Sizes,’ ‘Vancouver’ or ‘Victoria,’ or does it matter?

N: I guess probably Montreal. If you don’t want to say it, you don’t have to say anything.

Shapes and Sizes play with They Shoot Horses Don’t They at the Railway Club on June 29.