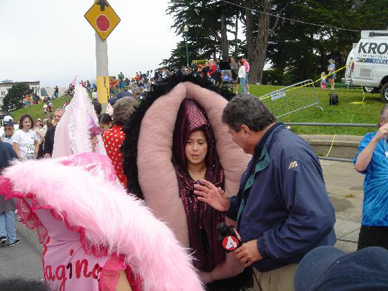 Our Lips Are Sealed

Good news vagina fans: the three American high school girls suspended for saying the word vagina in front of a school assembly were totally un-suspended! Sadly, high schools remain anti-anatomy zones and parents continue to believe kids should live in the dark in regard to their own bodies.

How is it that while access to information increases with every technological innovation, our schools continue to foster intellectual ignorance? Bad enough some schools refuse to teach the basic principles of evolution, but banning words? Well that shit’s just crazy. You know that episode of Law & Order: Special Victims Unit when Sissy Spacek’s daughter gives birth and doesn’t even know she’s pregnant? And you’re like, “Oh come on, she goes to M.I.T!” Doesn’t that make sense now? If she went to a high school that only taught abstinence and suspended you every time you said anything related to how bodies work, how the fuck would you know that a child was growing inside you?

Why do school administrators get so shy about sex and panic about the consequences of communication? Maybe they don’t realize that the alternatives are awful bus ads with weird cartoony condom super heroes asking teenagers to text message them sex questions. So just to be clear, it’s not OK to talk about vaginas and penises and penetration in school, but it’s totally OK to turn the issue of AIDS and unwanted pregnancies over to illustrated dildos. Way to stay relevant and understand the demographic, guys. Why not get a bunch of sock puppets together (not anatomically correct, obvs) and have them explain how abstinence, I mean sexual awareness, works?

The tragedy is, a lot of uptight principals and parents believe exposure to dirty words is what drives kids to have sex in the first place, proving they’re just as blithely unaware as the teens they’re in charge of. If more thirteen year old boys and girls knew about their hoo-hoos and wee-wees, we might actually curb STD outbreaks, unplanned teen pregnancies and alcohol-fuelled pseudo-liberation, ala Girls Gone Wild. If you teach a girl that vagina is not a nasty word, she might take her own burgeoning sexual empowerment more seriously.

I don’t even think I heard the word vagina the entire time I was in school. I remember close-up pictures of genitalia in full outbreak mode (ugh syphilis!) and something about condoms, but somehow we managed to slide through sex ed without the mention of pink ladies. Coincidentally, we had at least three major baby-drama episodes, and at least one public abortion. Of course this was in Surrey, where parents spend most of their time trying to ban children’s books while their kids pop out babies like human Pez dispensers. It’s not a secret folks, your daughters have cooters and your sons have penes. You can either shame them in to thinking God hates them for being born with genitalia, or you can encourage them to ask questions, be informed, and celebrate their people parts.