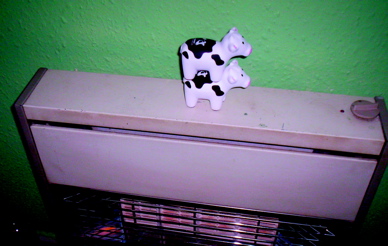 What happens when you don’t vote

On January 23, 2007 Stephen Harper’s Conservative
government celebrated its first year in “power,” bray-
ing the night away at some real barnburners, no doubt.

But lurking behind all the jubilation was something
Steve just couldn’t shake, something he won’t be able to
shake until another federal election is called; because
truth be told, the conservative hold on parliament is
tremulous, limp at best. Not that Harper’s iron grip has
gone soft, no the one thing we can be sure of is that the
man leading the regressive-conservatives is of the steel
dick variety. What I mean is now that the Liberals have
decided which middle-aged, white, French guy is gonna
lead their party to another victory and dozens of awk-
wardly phrased press conferences, its only a matter of
time before Harper is back in Alberta sodomising cattle
(for the record, who doesn’t love Alberta Beef?).

In light of his probable departure, I thought it might
be nice to revisit the accomplishments of the last year
and remember the many steps forward this country has
taken since we decided to punish the Liberals for pick-
ing Paul Martin.


approach when it inflicted a remarkable amount of vio-
lence on the Lebanese, an attack which prompted hu-
man rights groups the world over to call for a timely
resolution. Thus further highlighting the gaffe the PM
made when he delayed aid to Canadians stuck in Leba-
non during the Israeli-Lebanese conflict
lucky flash in the pan, Harper goes on to publicly de-
clare his desire for Canada to stop being such a pussy
and start developing more of a military presence in the
world; his wet dreams involve combat practice before
each session in Parliament.
bite, the PM places the tightest restrictions on the Ot-
tawa press gallery since its inception. Often times even
refusing to appear before the press for questions, his
muzzle extends to his MPs, whom he places on the
shortest of leashes.
lieves in transparency by making it painfully clear that
his lone female talking head, the stupefying Rona Am-
brose, is little more than a well-manicured marionette.
Also, has anyone even seen the token ethnic guy?
So we know what this guy loves, power, control and
violence, but what does Stephen hate?
in that order. Gay people and women people, especially
if they are the same thing.
overwhelmingly ambivalent public, whose measured
response is “Who cares?” the PM insists on pushing
his anti-gay marriage beliefs all the way to the House
of Commons. Surprisingly (to him) it was not a conten-
tious issue for anyone else and the rest of the govern-
ment told him to move on. Some feel his obsession with
hating gay people probably means he’s gay.
remaining rage out on women, poor people and the
slow. Even with a budget surplus he slashes funding to
federal programs that advocate for women, literacy and
social housing. When that wasn’t enough he dropped
equality from the Status of Women Canada because he
feels (as Bloc Quebecois MP Maria Mourani put it) that
“systemic discrimination [against women] doesn’t exist.”
The irony is lost on him.

And all that fun from a guy who regularly attends an
evangelical church and once wrote a letter to the On-
tario Federation of Indian Friendship Centres congratu-
lating them on their independence from Britain? Awe-
some. But at least now you know what happens when
people don’t vote.