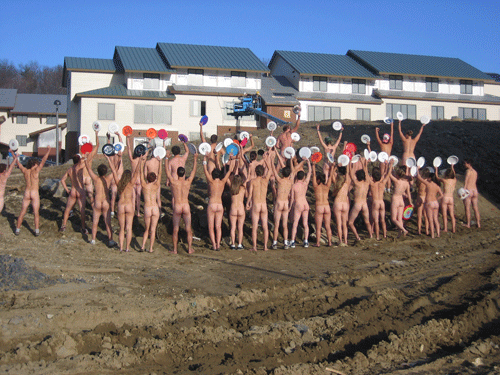 Networking in the nude

Having spent almost a decade of my life living on the West Coast, I’ve come to appreciate its many eccentricities. Namely, I’ve learned to love its inhabitants’ predilection for nudity. Hippies like to be naked, I get that. Aside from being the only place in Canada one would even want to get and stay nude, BC has such a tolerant air. I get the sense that whatever weird, ugly, naked, crunchy thing you want to do, people will totally be cool about it, man. Unless of course you just want to be left alone.

According to a recent story in the Province, a Vancouver Island nudist was booted from his exclusive nudie club for not socialising. Though ultimately, after legal action, the club agreed to re-admit him, the ousting so tarnished his image, he did not return. The club, referred to as ‘family-oriented,’ felt this particular member was less participation and more naked hibernation. Now as much as I want to put my two cents in on how perverted I think family-oriented nudity is, the story of a man who just wants people to get off his bare back is far too important.

The fact is we pack ourselves into cities like still-squealing sausages, bulging in every direction the way leggings do on anyone who’s had bread in the last two years. Concentrated is an understatement for the way we live; two and three and four to an apartment, rooms the size of walk-in closets, tiny cubicles, over-stuffed bars, heaving line ups. Everywhere you go there’s flesh. The barrage of humanity at every turn is enough to put anyone off. That’s why we retreat. We don’t go on holiday to hang out with more people, to force small talk at the hotel pool; we do it because it’s a socially sanctioned break from the community. It’s ten days off from pretending you care about other people. But even that is harder and harder to get.

Of course it’s important to spend time with people you care about. Building social skills is paramount in the development of a normal human being, and one can roll out a litany of sociopaths who have proven just that. But people, like everything else, should be taken in moderation.

There was a time we respected personal boundaries. It was rude to interrupt someone who was clearly seeking time alone. Now it’s unseemly if you aren’t the slickest, most networked chatty Cathy in the room, forcing your inanity on anyone who has the misfortune of being seen by you. There’s a monstrous pressure to always be talking, always be engaged, answer every phone call, respond to every email. We’re even expected to befriend our neighbours. I want to know if my neighbours are homicidal rapists, yes, but I don’t want to know about their kids’ soccer practice, what kind of laminate they used in their kitchen or who they think was really behind 9/11. A wordless acknowledgement as I’m rushing in the door will do just fine.

The least we can ask is that after 50-odd years of feigning interest in our friend’s new baby or our co-workers dumb perm, we may be allowed to retire nakedly and in peace. Can’t a guy be a nudist and alone? Is that any weirder than wanting to be naked with your kids and your neighbour’s kids and then playing a couple of rounds of badminton while you’re naked with all these kids?

And if you don’t want to be naked, but you do want to turn your phone off every once in a while, does that make you a crazy? No. It just makes you a reasonable adult person who knows where their boundaries are. Just like the weird naked guy who may have wanted to be naked all time, but didn’t necessarily want to do it with a whole bunch of other naked people around.