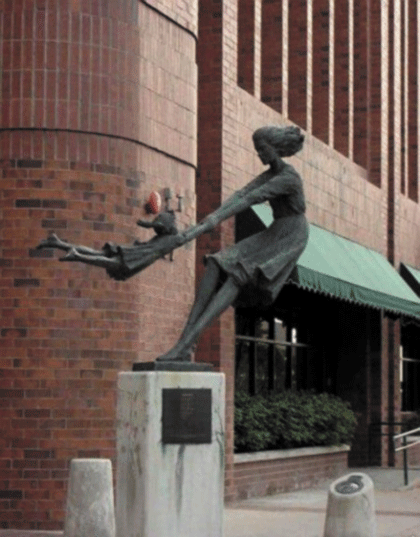 I was all set to write my column on ethnic stereotypes on TV and then the best headline I’ve ever read flashed across the computer screen.
“Woman Uses Baby As Weapon.” I don’t think it gets much better than that. This is right on the heels of another great newsmaker in the US, “Woman Seeks To Unadopt Child,” that has me questioning the credibility of the press when it decides to bury actual news with insane fodder. Now I’m not saying that the woman who swung her four-month-old baby in the air, using the child as a weapon to hit her boyfriend, isn’t an abhorrent lunatic.

She clearly is. The social verdict on the woman who wants to “dissolve” the relationship between her and her mentally unwell adopted son is still pending, the case being more gray than black or white. But the fact that both of these stories are being flagged much higher on the news sites than they deserve, is where my ire is slightly irked. When there are clearly far more pressing issues niggling at the majority of society (and I mean this in a global sense), why are the media wasting precious space? Perhaps in the wake of nuclear testing in North Korea, a steady stream of body bags carrying Canadian and American soldiers coming from Afghanistan and Iraq, and the Prime Minister doing away with funding for women’s advocacy groups, there is a need to profile some lighter fare?

But that still doesn’t explain why the Vancouver Sun’s website featured a story on a hiphop artist who references Chaucer, above a story on North Korea’s nuclear testing. The role of the media is to provide information – facts that are relevant to their local, national, and global communities. When the important facts can’t keep up with our appetites for information, the media throws us a bone with distracting news. Instead of digging deeper into the issues that genuinely affect our lives, we get pre-Halloween stories about kids in wheelchairs that can’t trick-or-treat. Who cares? Why are we trading news for gossip?

Story drowning is obviously nothing new, it’s a practice that has kept many a regime cloaked in the public eye despite their bloodied hands, but in “democratic” nations the stories the media choose to highlight – and the ones they bury – say a lot more about the credibility of the media themselves. Now that CTV/CHUM/CanWest, and any other news source you can think of, ostensibly share the same mind, how can we trust that “real” news will find its way to the front page? Town criers are perfectly capable of distilling the kind of sensational material often found in Hello!, but I don’t want my nightly news to do the same thing.
It might sound like a lot of fuss over one crazy baby momma, but when the government cuts funding to important lobby groups and it barely makes a splash on the public’s radar, it suddenly becomes a big deal. Either we have to start swinging babies in Parliament to garner some attention, or the media needs to take responsibility and fulfill its role as news gatherer, not office gossip.