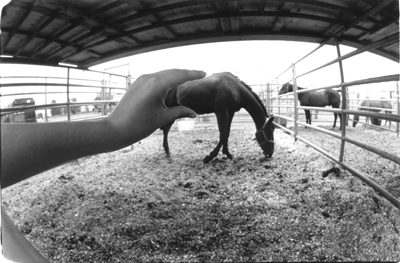 For three weeks I was obsessed with self-betterment. Despite a desire to avoid burnout associated with overworked clichÃ©s, I felt it was important not to let my brain deteriorate by indulging in countless hours of daytime television. That’s not how the mind works however, and when not occupied with mindless soaps, it jumps from worry to neurosis to paranoia. In between manic spurts spent “researching” at the library and hectically crafting sequin jumpers, I lulled the hours away in a tender depression. With way too much time on my hands I eventually succumbed to the heavy guilt that is aimlessness. Straddling the holidays and the impending onslaught of New Year’s resolutions I buckled under the pressure to “relax” and started a life-mapping project.

Unfortunately you can’t map out a life that functions on disorganization, so the map became a graph. The graph became a dysfunctional look at what could’ve been had I taken an entirely different route and ended in alleged immortality for the “other.” After taking a pity nap I had to wonder how far outside yourself do you have to step to acknowledge defeat or delayed victory?

Having a truckload of available guilt, such that can be easily traded on the open market, I found a great use for that extra time was feeling responsible for the world’s woes. When the New Year starts with news of a devastating natural disaster, it’s easy to put your own trivial resolutions in perspective. But caught between a bottle of red wine and a bag marked disaster relief, good intentions are easily marred by a guilty conscience. “What can I give?” turns in to “I wish there was something I could do” which in time becomes “I’m horrible for not doing anything.” It seems so easy to pay lip service to the betterment of humanity, without actually lifting a finger. Pessimistic though it may sound, self-esteem and ego generally accompany hefty cash donations and sympathetic diatribes are aimed at our own reflections. Most of us don’t know what it feels like to lose everything, but the fear of such a possibility drives us deep in to the pockets of generosity. Does this fear stem from a place genuinely committed to the salvation of man, or is it all too quickly replaced with the delusion that we can, by buying our way out, remain impervious to such devastation? In a who’s cache is bigger, super-powers scramble to be the bigger donor. The smiling faces of lost tourists quickly replace the photos of scattered bodies and drowned homes. It’s not long before the cause is buried under the cock wars of swarthy altruism.

When talk turns to similar disasters hitting home, it’s amazing that no one ever sees themselves as a victim, but a survivor. The “there can only be one, and naturally that one is me” mentality probably accounts for the majority of delusional superiority. Instead of mapping out a consistent do-gooder plan, we exist in spurts of generosity and heavy droughts of self-centered blindness. This is the father of guilt; the need to hide from reality 90 percent of the time and practicing extravagance the rest. For an economy that generally functions on guilt anyway, it’s refreshing to step out. If global currency could be converted to prevention, knee-jerk reactionaries may disappear and that alone would be worth it.

My new life map includes an open look at the situations and realities surrounding me. An attempt to counteract the weight of global paranoia, fear and depression, I’ve found the solution is barefaced honesty. Offensive at times, but the other line of the graph has been temporarily lifted out of the gutter.