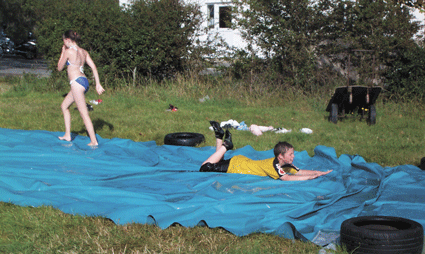 Slip and slide to work

The city is gearing up for the Olympics something serious. We’ve got DecorateVancouver, BirthVancouver, MarryVancouver – all kinds of pointless events taking place at our “conference” centres. Condos are going up faster than Gucci the sweetest Asian transsexual’s rates, and novelty t-shirt and souvenir stores are adding flames to their list of useless items. The one thing that we are still having trouble with is transportation, minor of course, but it might cause some trouble when we’ve got a bottlenecked population gravitating towards the city centre. I know you’re thinking who cares about transportation we’ll just build an Olympic-sized luge for everyone to slide around in, but barring the permits for the bobsled we’re fucked.

By now no bus service on Granville Street is like, whatever, but it still serves mentioning that this is the most retarded thing I’ve ever witnessed, including during my miserable stint in Surrey – where stupidity is the going currency. Everyone knows Granville’s sandwiching streets (both Seymour and Howe) are superfluous. They’re just arbitrary lanes holding up the meaty weight of the B.L.T.

Where are all the teenage runaways going to hang out now? Do you think they want to ride the bus to Howe and peruse the lamp stores? No. Do you think they’re willing to shell out $4.00 to ride in from Langley to shoe gaze at the Michael Blais gallery? Ha. Those degenerates are humans too and if they want to spend their freedom years buying Green Day t-shirts at the Rock Shop, who are we to stop them? I’m sure they could find their own way to Granville, they might even discover they like walking, but I just know they’d feel safer on the bus. Also, it’s so confusing for tourists to have to maneuver around road signs and blocked paths. We invited them here you know, we should at least make things comfortable for them. Like seriously, we might as well rape their children and slaughter their dogs. They don’t deserve it.

This alleged “Canada Line” doesn’t even go across Canada. It stops right in Richmond and what good is that going to do? By the time the beast is finished there won’t be a downtown to speak of. The sex shops and has-been clothing stores will be out of business because everyone will have forgotten about Granville Street. You know what happens then? A new Hastings. We’re going to have a brand-new useless pod to Aberdeen Mall and an L-shaped heroin-crack Mecca with which to welcome the world to Vancouver. Seymour and Howe won’t want to be breads to this puke sandwich, because they are so out of there as soon as all this shit goes down. Swarovski crystals and meth? Not before Labour Day my friends.

Granted my advice is coming in a little late, but Sam Sullivan of all people should understand how transportation should really work. Just a thought, but it’s not too late to take a pause on this whole underground SkyTrain-thing and think about our future. The kind of future that involves sensible alternatives to trains, buses, and cars. Scrap the roads, put in the water slides, and let people slip and glide their way to work. Sexy, convenient and fun? That’s what really makes a world-class city.