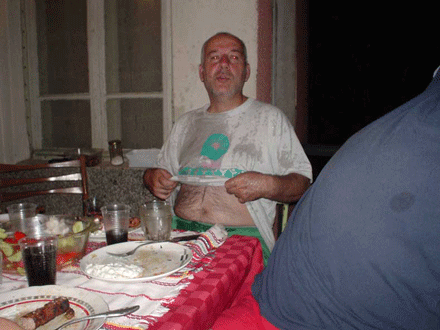 Maybe because I try not to pay attention to the people around me when I’m walking to and from home, but lately I’ve been more aware and freaked out by the public than ever. I really do just assume that everyone follows basic sanitary and courteous guidelines when it comes to sharing the bus, sidewalk, or public space. Then I look up from my book for five seconds and there are enough violations of acceptable human behaviour I want to choke on my own vomit and die.

You might’ve been on the bus with me when that older lady was clipping her fingernails completely willy-nilly, just loose as a goose while her DNA was jumping all over the place. Or perhaps you were behind me when I was walking down Pender and noticed large white flakes hitting my face. You could even have been the man responsible for those flakes, you eating that huge bun and shaking your crumbs all over me. It was so amazing when you decided to cross the street at the same time as me, so that the crumbing didn’t stop even for a minute. It was like a giant bun was sweating mouth flakes specifically designed for me.

But I guess that’s not even as bad as the couple sitting at bus stop. I seen couples taking it a little too far with the dry-humping in public before, but I’ve never seen a man shove his girlfriend’s face into his chest and force her to suck on his pale, stagnant, rolling nipple flesh in broad daylight. Right after I was crumbed by a stranger! All this before noon on a Tuesday.

I don’t know if I’m over-reacting, if I’ve developed an aversion to social interaction that’s rendered me vulnerable to seemingly regular things. It could be something as benign as that. But I’m thinking that we’ve all taken some silent oath to ignore everything that anyone does for the sake of being polite. I understand that logic, I don’t want stare too long at a bug-eyed woman who has just punched a McDonald’s employee in the back of the head. That would be rude. And I might get punched in the back of the head. Nor do I want to tap the woman sitting next to me on the bus stroking her genitals and remind her that some things are best left behind closed doors. No, that isn’t neighbourly. I mean, who is she really hurting, right?

It’s too much. We’ve lost all control over our once sacred bodily functions. Instead of reigning in perverse behaviour, we’ve opened our arms to it. So scared to go back to a time when we repressed every aspect of ourselves to maintain a sanctified level of decorum, we’ve catapulted to the far edges of sanity. For so many years the word “intolerance” has been branded into our collective consciousness and we fear the slightest deviation from total openness. But a lot of intolerance existed for a reason. Because it’s not okay to jerk-off on the Skytrain, molest your girlfriend on the dance floor, groom on public transit, crumb with abandon on the street, or piss off of your balcony.

Believe it or not, that behaviour does affect other people. It affects everyone that happens to be within ten feet of you. It puts those people in a very awkward situation where they don’t quite have the heart to tell you to stop, but also have to control their own dry-heaving influenced by your fucked up actions. And more practically, you have to stop doing these things, because nine times out of ten the person that has to witness you in the middle of your daily perversions is me. And I’m still washing the crumbs off.