Hoarding my life away 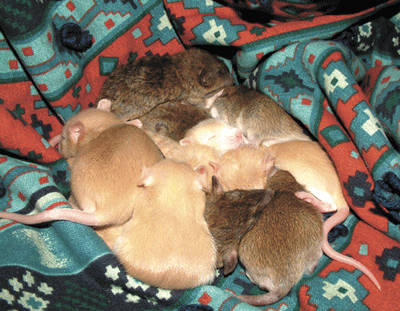 Mine! Mine! All mine!
I’ve never been very good at letting things go. Not just in an emotionally poetic way, but in a real physical sense. Whether it’s an old pair of shoes that have never been worn, a bad job or a lingering cold, I can’t seem to shake the urge that what’s mine is mine, even if I don’t like it anymore. Most experiments in purging the old have resulted in depression, anger, remorse and sulking. I barely (this has only happened on occasion) stop short of snatching things back from the hands of babes. I don’t think this is a case of greediness, selfishness or a spoilt apple. I just feel programmed to horde, lest judgment day rolls around and I’m left with nothing, again. I get that horrible premonition of the day I suddenly remember the antique lace dress in the basement and after hours of rooting through disgusting piles of other crap, remembering that I’d given it away in a moment of feel-goodedness. Or worse, going in to the Union Gospel Mission and like a real asshole, buying back (at a higher price) the shirt I’d donated altruistically at Christmas time. It’s not even the idea of someone else having my stuff, but the idea that they might enjoy it more, or can utilize it somehow to make their lives better.

It’s that feeling you have when you see a friend wearing something you hated and it looking amazing on them. It suddenly looks au courant and avant garde. Not like the rag it was when it was buried at the bottom of your closet. It’s that instinct in all of us to maintain our own identity by defending it against others.

As a teenager I used to do it to my sisters all the time. I would hand things down and take them back up. But according to my parents, I’d been practicing this kind of behaviour all of my life. They would make sure I had the best toys as soon as they came out. And I had all the accessories available to complement them. But if a neighbouring child came over with a rock, I had to have it. I would offer a trade for whatever pile of dirt they would wave in my face and I was always unsatisfied until I had everything they did. Obviously they used this to their advantage and consistently ripped me off. But I’ve learned from those mistakes and now feel an incessant need to have theirs, yours and mine all piled in a filthy pile beside my bed. It’s the modern way of accumulating cheese in times of war, only it reeks of the nouveau poor. I’m struggling, so these objects keep me warm in times of desperation. But they add no value to my life, and when it’s crunch time, have absolutely no re-sale value. How pathetic. It’s really the rat’s life, or worse, a crow’s. Collecting and piling the useless, even if it means putting an eye out to preserve it.

They’re artifacts of an ideal, but the ideal is hollow and forgotten as soon as the next piece of tinsel catches the light. I guess the Buddhists were right about letting go of our wordly possessions. Of course if they don’t need them anymore, I’m always willing to take them.