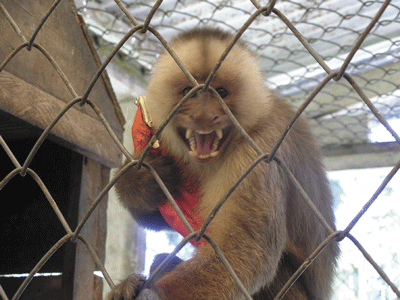 The BC Human Rights Tribunal often handles sexual discrimination suits where a party is denied access to a particular facility or employer based on their sex. One such popular case was that of Kimberly Nixon, a transsexual woman who couldn’t work at Rape Relief on account of the fact she used to be a man. The case was drowned in media attention, especially after Nixon lost. The Tribunal is now hearing a similar case based on allegations of discrimination, this one surrounding the murky political waters of all-female gyms.

Ralph Stopps is a leaky condo repairman, he lives in Burnaby and he likes working out. Ralph is tired of scraping (medicine) balls with “meatheads”, so recently tried to cash in a ten-week free trial at a local gym. And when Ralph presented the coupon, draped in a unitard, he was haughtily turned away by management. Because the women at Just Ladies Fitness couldn’t understand the miscommunication and Ralph insisted it didn’t really count as a dick anyway.

I don’t know much about exercise, but I understand the need for women to have a private space to do so. Seeing your own ripply flesh crippled by Lycra can only be made better by seeing some other lady’s giant ass making dents in the Stairmaster. Crying about our physical inadequacies brings women together.

Avoiding the neckless steroid monsters populating every other gym is just a bonus. There’s nothing pervier than a man watching women work out. We’re heaving, panting and struggling with fatty nodes and there you are looking at the nodes. Most women are intimidated by the machismo that accompanies stupid physical activities like weightlifting and so should be allowed to do their yogalates in peace. If a man has a problem with the other men at his unisex gym, he should invest in some dumbbells and a basement like every other creep without a gym membership.

When political correctness was de rigeur we struggled with the concept of truth. Everything was supposed to be feasible, accessible and possible. Naturally there was a backlash against this kind of irrational and idiotic reasoning and it petered out of existence. One of the scraps of PC is the idea that anyone can still do anything, free of colour, sex and shape. Yes, anyone can do anything they wish, unless you are a man and want to work out at women’s only gym.

The Charter Of Rights and Freedoms states that every individual has the right to live free of discrimination, but its lesser known, less sexy clause 15(2) also states a discrimination is legal if it prevents and precludes other discrimination. Though it may seem archaic to retain separate sex institutions of any kind, the truth is some remain as a need and not as a default. Women have every right to feel comfortable in an activity that was once forbidden to them. They have a right to use every machine without intimidation, make mistakes without mockery and exercise without the fear of physical danger. Maybe it’s true that Ralph Stopps deserves a place to pound his weights without the annoyance of muscle jerks impeding his momentum, but for the time being he’ll still have to tough it out with other dudes. Perhaps he should consider a gym for Simply Morons and find a place where he too is comfortable.