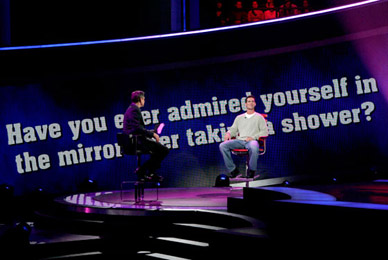 I always thought the bottom of the barrel for reality television would be something along the lines of an on-air suicide or some such seedy fate. But it seems the apex of modern viewing is actually a show that destroys lives through honesty and it’s awesome.

Moment of Truth has all the elements of a Greek tragedy. The set is sparse, with the physical and emotional tension represented by two hot seats, one for the host and one for the perpetually in limbo contestant. Beside the player is a lie-detector machine and projected behind them on giant screens are the contents of their soul. Their futures boiled down to true or false. In front of them are their family and friends. The scene evokes Dante’s inferno, a layer of purgatory so damning I actually sweat just looking at the tableau. It’s drama at its finest and played out with touching brutality.

The rules are easy. Each contestant submits to a lie-detector test and is put to task through a series of awkward, painfully uncomfortable and unnerving questions. If you lie, you win nothing. If you tell the truth, you stand to win half a million dollars … and alienate your family, lose your job or decimate your reputation. It’s a lose-lose situation and every single contestant so far has walked away in tatters.

One gentleman admitted to stuffing his jock and waiting to have children with his wife because he wasn’t sure she was the one. He lost when the question of whether he’s inappropriately touched his clients (he’s a personal trainer) came up and he said no. Turns out the kind of guy who stuffs his jock pervs out on clients. The look on his wife’s face was one of deepest pathos.

Another man’s estranged father showed up to ask his son if he would forgive him on live TV. His emotional breakdown and their subsequent reunion eclipsed by the fact that he just won some money!

Do you think your boyfriend is gay? Does your husband’s body repulse you? Do you really care about the starving children in Africa? These are the burning queries posed to miscast protagonists.

But our anti-hero in this tale is a woman willing to bear it all. She admitted to having feelings for her ex, cheated on her husband and basically regretted her entire life up to this point. She was at maximum disclosure. And then the God of network television programming asked if she thought she was a good person. The eternally unanswerable question, my television dripped with irony. Did she think she was a good person? Can one be a good person after cheating and lying for so many years? She answered yes, the screen flashed FALSE. Turns out her biggest lies were to herself. Did she believe herself to be bad, but lied? Or did she see good and the machine just went, “nope!” Could Euripedes have written it better? I doubt it.

This is our collective climax. It’s the tearing down of the reality illusion. We pretend to want romantic couplings and tales of survival, but we watch for the chance to see failure and unraveling. Moment of Truth cuts to the heart of our obsession with fame, with money and with ourselves. If you tell the truth, you win alone, dismantled in public and abandoned. If you lie you are pathetic and whatever semblance of privacy you thought you were protecting is gone anyway.

It’s the best and worst of television and I defy you not to watch.