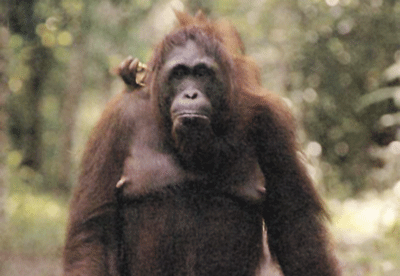 The Case For The Female Orgasm

According to Jane Magazine, 43 percent of women experience orgasm every time they do it. However, 30 percent of women rarely, if ever, can claim they’ve spoken to God while being penetrated by Adam. These stats aren’t groundbreaking, but a recent article in the New York Times suggests that those 30 percent can relax because females orgasms are redundant and being evolved out of existence. Being out of vogue with evolution appears to be a hindrance for the majority of humans walking the streets, but hearing that the last bastion of female sanity might quietly and coyly disappear is grounds for revolt.

The case of the female orgasm: Bias in the science of evolution is a new book by Elizabeth Lloyd. Lloyd takes on 20 leading theories that try and pinpoint the evolutionary existence of female orgasms. Operating under the theory that male orgasms come around to promote reproduction, the book attempts to categorize the need and seed of feminine juices. Somehow I was operating under the theory that the experience of an orgasm was in and of itself a great enough reason for its existence. But then again, I fall under a different percentile. As further proof that most of modern science seems to be a staggering waste of time and money, scientists have spent the last four decades desperately investigating the ins and outs of women’s bodily reactions. Coming up with a plethora of ridiculous reasons designed to pigeonhole and pejoratize the female cuming of age, they’ve gone through every possible natural reason for the “phenomena.” Including such breakthroughs as: semen hoarding, survival maximizing, and parallel development. The last one claiming that, like the superfluous male nipple, the female orgasm is merely a byproduct of hermaphroditic development and is essentially a biological mistake. Tell that to the bionic squirter whose video I accidentally found on the Internet. I’ll show you a biological mistake. Check it out ladies, if you can’t make it, don’t worry because soon your vagina will experience entropy and clamp shut for good. At least, science wills it so.

One of the more interesting findings of orgasm research involved the study of primate orgasm. Female monkeys are known to have experienced regular orgasms as a way of keeping male monkeys from killing their babies. In other words, by humping and enjoying as many horny male monkeys as possible, women monkeys find that men monkeys are less likely to kill offspring because they don’t know who’s baby daddy they is. If only to spare the world any more day time drama involving the words, “you are not the father” women should practice equal opportunity breeding to assure the men in their lives each one is equally important and encouraging them not to kill their bastard children. Evolution bonus. In chimpanzees, clitoral stimulation is a reminder to female chimps to continue copulating until they climax. This makes for more chimps and happier mothers, further proving the antiquated idiom that practice makes perfect.

Social studies have long proven the necessity of female orgasm in cultural progression. When women were considered clinically insane for breathing out of turn, physicians prescribed pharmaceutical vibrators to ease hysteria. Even in the repression of Victorian morality, men understood the benefits of getting chicks off. If evolution really can prove the female orgasm unnecessary, we’re going to have to find an equally gratifying solution to pent up nerves. Perhaps something involving the standard clichÃ©d desires of modern women like revolutionary vacuum cleaners and big diamonds. Unfortunately, I don’t think a diamond can fit that far up, though a vacuum cleaner might make for innovative scientific “research.”

According to Lloyd getting the evolutionary story of the female orgasm is vital to understanding the future of women’s bodies and may rear important implications for men as well. I suggest men conduct greater research in to actualizing and assisting female orgasms, the results of which I believe will rear greater implications for the present situation of women’s bodies and men’s safety.